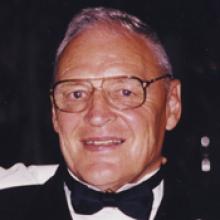 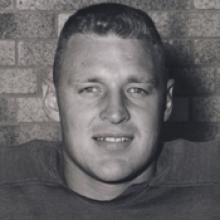 RON HECTOR MEADMORE Surrounded by family, Ron Hector Meadmore passed away on August 3, 2013. Ron was most well-known for his outstanding athletic career with the Winnipeg Blue Bombers but he always made his family his first priority. His life was devoted to his three sons; Glen, Neil (Kelleanne) and James (Monica). Extended family of Neil and Kelleanne in Michigan were valued and he looked forward to visits from his grandchildren, Koty, Kayla and Connor. Ron was always very interested and supportive of his wife Marion's work with her First Nations people. Ron was Marion's best friend and she will miss her "rock"! Ron was born December 26, 1933 in Culross, MB and shared a wonderful childhood with siblings Louise (Elio) Biasi of Kamloops, Digby (Carol) Meadmore of Winnipeg, and Dorothy (Dick) Winters of Oak Lake, MB. Ron attended Webster country school near Fannystelle, MB for grades 1-8 before graduating from Kelvin High School and going on to achieve an Agriculture Diploma from the University of Manitoba in 1954. Along the way, he met Marion Ironquill, they fell in love and were married; a wonderful union of almost 60 years together. Ron played 10 seasons in the CFL; seven for the Winnipeg Blue Bombers and three with the Saskatchewan Roughriders. Ron was a member of three Grey Cup teams in 1958, 1959 and 1961. Ron was a farmer who worked the fields of southern Manitoba until he retired in 1999. Ron was named to the Manitoba Sports Hall of Fame in 2004 as a member of the Blue Bomber 1958 Grey Cup Championship team. Ron enjoyed weekly gatherings with former Bomber teammates and twice yearly get-togethers with his farm friends. A service to celebrate the life of Ron Meadmore has already been held and the family would like to thank everyone for attending to honour and pay their respects. The family would also like to thank the doctors, nurses and medical staff at the Victoria General Hospital for their compassion and respectful end of life care that they provided to Ron, in offering comfort and pain relief during his final days. Ron's lasting legacy as a husband, father, grandfather, athlete, citizen and friend will not be forgotten and he will be deeply missed.