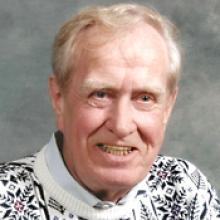 KENNETH GEORGE SARSON For a man who could laugh deep and long enough to shake the walls of life, he slipped very quietly into death. After a lengthy illness, surrounded by his wife Barb, his children, and grandsons, Kenneth George Sarson, aged 84, died at Deer Lodge Centre, August 16, 2013. A baby was born in Cartwright, Manitoba on October 15, 1928 to the proud pleasure of Bernard and Dorothy Sarson and the glee of his sisters: Anne, Mary, Dot, Margie and Nora. The town doctor was so excited, he ran down the street shouting: "The Sarsons' have a baby boy." As a young man, Ken worked briefly in the gold mines in Bissett. He made a friend named Stanley Bowen who had a younger sister named Barbara. Upon being introduced to Barb, Ken wrote his mother and told her that he had met the girl he was going to marry. Four years later, Ken and Barb tied the knot on October 6, 1951. They raised eight children: Ken (Davida), Barb, Bob, Gary (deceased), Lahl (Annie), Irene, Janet (Praba), and Patty. Ken was also adored by his dozen grandchildren: Leah, Elana, Jenny, Katie, Frankie, Lloyd (deceased), Claire, Alistair, Jackie, Kenny (Cara), Evan and Michael, and by his great-grandsons Owen, Liam, Isaac and Jackson. He is also survived by his beloved sister Nora, (who married Ken's good friend Dave Lewinski), as well as long time friends Pauline Morris and Kay and Don Thompson. Ken loved the 150 year old house on Assiniboine Crescent which ultimately expressed his open and welcoming personality. He re-wired, re-plumbed, moved walls, tinkered, and created a home where multi-generations of his family and friends gathered for weddings, parties, re-unions, weekly dinners and breakfast gatherings that included seating for 30 in the renovated kitchen. Ken got great pleasure and satisfaction from eating thick slices of roast beef or a whole teaspoon of marmalade on one bite of toast or a sandwich of fresh white bread, thick slices of very old cheddar cheese with raw onion as well as Barb's homemade apple pie or lemon pudding. What is most legendary in his family is how much he hated salad and other green vegetables. We will miss our soft heart of the Sarson family! We love you Ken, dad, and grandpa -Rest in Peace. The family would like to express their gratitude to Dr. Hasdan, Dr. Omelan, Arlis Decorte and the rest of the wonderful staff on T3 at Deer Lodge Centre. A celebration of Ken's life will take place during a memorial reception on Thursday, August 22, between 3:00 and 6:00 p.m. with a time of sharing to begin at 3:30 p.m. at Thomson Funeral Home, 669 Broadway. In lieu of flowers, donations can be made in Ken's name to Aboriginal Health and Wellness Centre, Indian Residential School Fund, 215-181 Higgins Avenue, Winnipeg, Manitoba R3B 2G1. THOMSON FUNERAL HOME 669 BROADWAY, WINNIPEG, MB R3C OX4 783-7211 Condolences may be sent to www.thomsonfuneralchapel.com