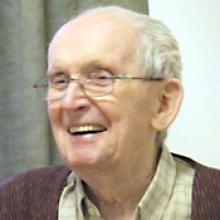 HARRY ALEXANDER HOUSTON August 16, 1924 - August 20, 2013 Peacefully at Seven Oaks Hospital, with family by his side, Harry passed away on August 20 at the age of 89. He was predeceased by his first wife Margaret Aileen in 1973, and his second wife Edith Pauline in 2005. He was also predeceased by his sisters Betty (Alvin-deceased) Miller and Norma (Ewart-deceased) Carruthers and by his parents Lawrie and Edna. He is survived by his son Dale (Michele) of La Salle, daughter Debbie of Victoria, sister Connie (Gordon - deceased) Lofto of Winnipeg and was Poppa to four grandchildren and four great-grandchildren. Uncle Harry will also be missed by numerous nieces and nephews and by many friends. Harry was born and raised in Starbuck and spent much of his adult life farming there. In the winter, he worked at UGG in St. Norbert, commuting with co-workers from Starbuck and Fannystelle. He then worked many years for the Schwartz family at Northern Sales in Winnipeg, eventually retiring from there. While late to the game of golf, Harry became an accomplished player, with three Holes in One to his credit. Apparently all that time practicing his short game along McGillivray Boulevard paid off nicely for him! The family would like to thank the many people who cared for Harry over the last few years, including friends and neighbours in Starbuck, and Cambridge Towers, Auntie Connie and all the wonderful nieces and nephews who visited; the staff at the Waverley, Heritage Personal Care Home, and everyone on Unit 1 on the 4th floor of Seven Oaks Hospital. The care provided at Seven Oaks Hospital was exceptionally competent, kind, and compassionate. Thank You! A funeral service will take place on Sunday, August 25 at 2:00 p.m. at the Starbuck United Church with Reverend Cathy Maxwell presiding. A private family burial is planned at a later date. In lieu of flowers, if so desired, a contribution can be made to the Alzheimer's Society or to a charity of your choice, or, consider taking a friend or neighbour for lunch or a round of golf in Harry's memory. Dad would like that! Eternal Grace Funerals - 204-505-4559