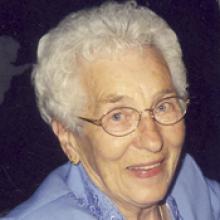 DORIS DOHIE Doris Dohie of Brandon, formerly of Russell, MB passed away at the Brandon Regional Health Centre on August 25, 2013 at the age of 85 years. Doris is survived by her husband Nick, daughters: Margaret (Matthew) Peech of Portage la Prairie, MB, Delores (Pierre) Cyr of Ottawa, ON, son Dennis (Mickey Brownridge) Dohie of Russell, MB, five grandchildren, seven great-grandchildren, sisters: Lena Prokopetz of Windsor, ON, Carrie (Gord) Turrell of Windsor, ON, Anne (Ed) Mushaluk of Winnipeg, MB and brother Bill (Martha) Toderan of Yorkton, SK. Prayers will be said Thursday, August 29, 2013 at 7:30 p.m. from Braendle-Bruce Funeral Chapel, Russell. The funeral service will be held Friday, August 30, 2013 at 10:00 a.m. from St. John the Baptist Orthodox Church, Shell Valley, MB. Interment will follow in the Parish Cemetery. If friends so desire donations may be made to the Heart and Stroke Foundation of Manitoba. Remembrances and condolences can be e-mailed to bbfs@mymts.net. Braendle-Bruce Funeral Service of Russell, Manitoba in care of arrangements. (204) 773-2747