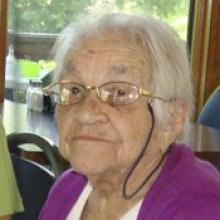 ANNIE SMITH (nee BUYARSKI) 1915 - 2013 On Friday, August 23, 2013 Mum died peacefully with her family by her side. Surviving to cherish Annie's memory are her children Flora Mitchell of Winnipeg, Elmer Smith (Edie) of Winnipeg, and Sandra Ross (Don Hummel) of Beausejour; sister Olga Hnatiuk of Winnipeg; as well as seven grandchildren, 14 great-grandchildren and three great-great-grandchildren. She was predeceased by her husband Edward in 1989; brother Frank in 2008; and her sons-in-law, Ron, Richard and Lyle. Mum spent most of her life in Beausejour, MB and travelled many times to the West Coast, East Coast and to the U.S. She enjoyed the activities at the Beau Head Seniors as well as at Stony Plains where she resided for the past 11 years. Bingo and Pokeno being among her favourites. Her cohorts considered her to be the leader' as she was not afraid to speak out. Despite poor hearing and eye sight she loved to deliver the local paper in her wheelchair to the two floors. Yes, Mum, you were a spunky gal. A Graveside Service will be held in the Beausejour Cemetery on Saturday, September 21, 2013 at 1:00 p.m. with Annie's nephew David Hnatiuk, officiating. Reception to follow at Stony Plains Terrace, 606 James Avenue at 3rd Street, Beausejour, MB. We would like to express our deep gratitude to the staff at Stony Plains Terrace for their wonderful care and also to the staff at the Beausejour Hospital during Mum's last week. In lieu of flowers, if so desired, a donation may be made to a charity of your choice. Wojcik's Funeral Chapel & Crematorium, serving Beausejour, wojciksfuneralchapel.com 204-268-2263.