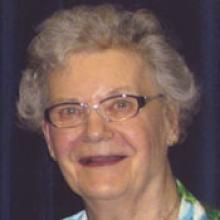 HELEN BORODY 1926 - 2013 Helen was born in Winnipeg on January 6, 1926, only daughter of John and Frances Bajurny. She had two brothers, Frank and Stan. She grew up in Kenora and Bradford, Ontario. She returned to Winnipeg in 1947 to marry Walter Borody. Helen was a committed wife and mother. She saw her role as a true labour of love. She gave her children love, support and the greatest gift of all, independence. Her children are grateful for her courage. She loved to entertain. Her bridge group was legendary. For decades her home was regularly filled with the laughter of the bridge ladies'. She was a regular on the golf course at Breezy Bend Golf and Country Club. She loved being at the cottage in the summer at Brereton Lake. In 1972 she became a regular fixture in the family business, C.W. Pooles and Company. She looked after clients, did the books and generally kept Wally in line (a full time job in itself). She continued to work in the business until late 2005. Her later years were spent in Tuxedo Villa. Our family is grateful for the care she received from those we refer to as the angels'. A special thank you goes to her caregiver Vida Venzon who made her last years much brighter. Helen passed away on Thursday, August 29, 2013 with family at her side. Left to mourn are her children John (Corinne Caron), Robert (Wendy) and Carol-Ann (Peter Siemens), her grandchildren Crystal (Philip Campbell), Lisa, Matthew, step-grandchildren Dallas Henson (Brian), Brad Crawford (Haruka Ueno), Shannon Friesen (Kenton), and step-great-grandchildren Emma, Kaya and Azsa. She is predeceased by her parents, her brothers, her husband and her son Richard. A celebration of her life is to be held at Chapel Lawn, 4000 Portage Avenue on Wednesday, September 4, 2013 at 10:30 a.m. Reception and interment to follow. For those who wish to sign the online Guest Book please visit our website. Chapel Lawn www.chapellawn.ca 885-9715