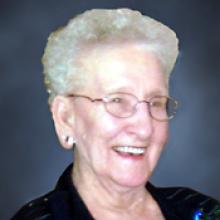 ANNA ABRAHAMSON (nee HORTNESS) March 6, 1920 - August 26, 2013 Peacefully on Monday, August 26, 2013 Anna Abrahamson (nee Hortness) passed away at the age of 93 in Pinawa, MB. Born and raised in Redvers, SK, Anna met her husband Walter in Regina. Together from 1945 to 2005 they lived and raised their family in Creighton, SK. They relocated to Brandon, MB in 2005 to be closer to their children. With the passing of Walter and her two daughters, Sharon (Kent) Monaghan and Janice Carriere, Anna moved to Pinawa, MB to be close to, and cared for by her son Doug. Anna will be dearly missed by her son Doug (Heather), and her eight grandchildren Kevin (Tiffanny), Kerri (Wayne), Kellie (Clarke), Colin (Tisha), Shannon, Doug, Andrea and Dan (Michele). She will also be missed by her 11 great-grandchildren Kassandra, Krysten, Kyle, Jordan, Joey, Owen, J.T., Anna, Eve, Nadia and Kadence, and her great-great granddaughter Sophia. A private family memorial service will take place at Memories Chapel, Brandon, Manitoba. If friends so desire, donations in memory of Anna may be made to the Heart and Stroke Foundation of Manitoba, 6 Donald Street, Suite 200, Winnipeg, MB R3L 0K6. Expressions of sympathy may be made at www.memorieschapel.com Arrangements with Memories Chapel & Pre-Planning Centre, Brandon, 1-888-694-8153