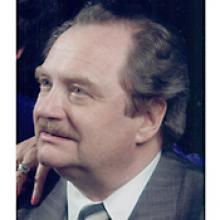 DONALD NEIL MACIVER 1931 - 2013 Surrounded by his family Donald Neil MacIver passed away peacefully on Saturday, August 31, 2013. He is survived by his loving wife Pamela, his children Deborah Martin (Rick), Constance Ranson (Mark) and John (Juliet) of Calgary. Donald was predeceased by his son Donald Charles. He is also survived by his seven grandchildren Kyle (Claire), Calum, Alex and Laura Martin, Jack and Daniel Ranson and Meagen Pattyn. Born November 27, 1931, to Charles and Johan in Winnipeg, Donald attended United College and graduated from the University of Manitoba with a Bachelor of Laws in 1957. During his education he served with the Canadian Military at Fort Churchill, Manitoba. After graduation Donald served for five years in Ottawa with the Office of the Judge Advocate General retiring with the rank of Major. Donald returned to Winnipeg and continued his career as legal counsel with the Metropolitan Corporation of Greater Winnipeg before entering private practice. Donald was a loving, loyal husband and father who will be greatly missed. The family expresses their gratitude to the St. Boniface I.C.U. team for their compassionate care. Cremation has taken place and a service of remembrance will be held at Thomson Funeral Home, 669 Broadway on Thursday, September 5, 2013, at 2:00 p.m. with the Reverend Jack Duckworth officiating. In lieu of flowers, a gift to the charity of your choice would be greatly appreciated. Nunquam Obliviscar (Never Forget) THOMSON FUNERAL HOME 669 BROADWAY, WINNIPEG, MB R3C OX4 783-7211 Condolences may be sent to www.thomsonfuneralchapel.com