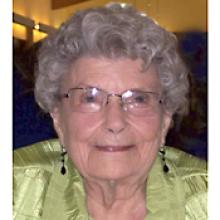 PHYLLIS ROSETTA LAWSON (nee GIBBS) 1925 - 2013 Mom was born on April 1, 1925 in Winnipeg, Manitoba to Albert and Alice Gibbs. She was the younger of two daughters. In 1936 she moved to Manitou with her family where her Dad had purchased the Barber Shop. She made many lifelong friends there. On January 12, 1946 she married Bob Lawson. They raised their children on Dad's home farm in Darlingford and then moved to Morden. Dad passed away in 1998 and Mom remained in Morden until 2011 when she moved to Boyne Lodge in Carman. On September 8, 2013 she passed away peacefully, surrounded by the love of her family, after spending two years in the wonderful care of the Boyne Lodge staff. Mom was predeceased by her husband Bob in 1998 and her sister Ruth in 1952. She leaves a legacy of four daughters, 11 grandchildren and 21 great-grandchildren: Sandy Sloane and her children: Tyson (Chontaille) Shtykalo, Bethany and Avery; Tanya (Kerry) Stokotelny, Jacob and Sarah; Deana Abstreiter, Andreas; Devin (Angela) Shtykalo, Hayden and Kellan; Jo-Anne (Larry) Robbins and their children: Kevin (Robin), Gabby and Kaylee; Alison (Levi) Wiens, Addison and Macy; Bobbi (Darryl) McCallum and their children: Mandy (Jason) Vandal, Danica, Ryder, Easton and Grady; Julie (Keith) Glawson, Jordynn; Jill (Scott) Edwards, Jett; and Laurie (Bruce) Wood and their children: Brian (Theresa), Ben and Edie; Lindsay (Rob) Smith, Jack and Edison. She is also survived by her sister's children, Bonar and Dan Bell. Mom's Memorial Service will be held on Friday, September 13, 2013 at Wiebe Funeral Chapel, 1050 Thornhill St. in Morden at 11:00 a.m. with lunch following the service. Private family interment to follow. We would like to thank the wonderful staff of Boyne Lodge for keeping our Mom safe and comfortable for the past two years, Trudy Thorarinson for all the support she gave to Mom and our family, and to Wiebe Funeral Chapel for their care and concern shown to our family. If friends so desire, donations may be made in Phyllis' memory to the Boyne Lodge, Box 910, Carman, MB R0G 0J0. Wiebe Funeral Chapel, Morden In care of arrangements 204-822-4755 wiebefuneralhomes.com