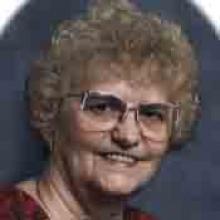 MARY GIESBRECHT (nee FEHR) 1925 - 2013 On Friday, September 20, 2013 at Salem Home in Winkler, MB, Mary Giesbrecht, aged 87 years, formerly of the Haskett school district, Rosenfeld and Winnipeg went to her eternal rest. She leaves to mourn her passing three daughters, Yvonne and John Trinke of Winkler, Sandra Thiessen of Winnipeg, Lori Ezako and Lorne Ozuk of St. Andrews, three sons, Ed and Janet of Darlingford, Lorne and Carol of Winnipeg, Gene and Barb of Winnipeg, son-in-law, Rob Ezako of Winnipeg, 18 grandchildren, 27 great-grandchildren and two sisters. She was predeceased by her husband, Edward in 2008, four sisters and six brothers. Viewing will be from 1:00 p.m. until 9:00 p.m. at Wiebe Funeral Home, 121 8th St. in Winkler and at the church prior to the service. Funeral service will be held at 11:00 a.m. on Thursday, September 26, 2013 at the Mennonite Brethren Church, 120 Pineview Dr. in Winkler with interment to follow at the Haskett Cemetery. If friends so desire, donations may be made in Mary's memory to the Alzheimer Society of Manitoba, P.O. Box 119, Winkler, MB R6W 4A4. Wiebe Funeral Home, Winkler In care of arrangements, 204-325-4201 wiebefuneralhomes.com