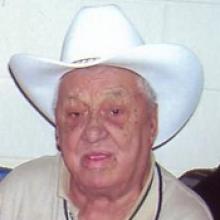 ANTOINE WILLARD CHARTRAND Sadly but with much love of family by his side Antoine Willard Chartrand passed away the evening of Friday, September 20, 2013. "Swede" as he was affectionately known, was born in Duck Bay, Manitoba on June 29, 1930. He was 83 years old. Antoine (many also knew him as Tony) was predeceased by his father Michel (Mike G) Chartrand and mother, Flora Jane Chartrand (nee Pangman), his brother Raymond Chartrand and sisters Vetalina Heroux, Grace Ducharme and stepsister Grace (Larose) Guiboche. He is survived by his sister Elisabeth Gryseeles. He is also survived by his wife Irene Chartrand and their children, Anthony (Ann) Chartrand, Raymond Chartrand, Robert (Connie) Chartrand, Ruby (Serge) Morin, Alvin Chartrand, Mildred Chartrand, Richard Chartrand, Karen Morisette, Colinda (Randy) Ferland, Selina Chartrand and Jennifer Chartrand. Antoine and Irene have numerous grandchildren and several great-grandchildren who will miss their grandfather immensely. The son of a fisherman, much of Antoine's early years were spent earning a living and supporting his family off Lake Winnipegosis, but he toiled in other jobs such as being the Duck Bay School night watchman, Ice rink maintenance man and other such employment to support his large family. In the late 1970s he moved his family to Winnipeg and there he continued with his effort to help his wife with raising their children. From being a security guard to working at the fish plant he did what a responsible father had to do. After he retired and his pension years began he spent the past 16 years at his son's business in Winnipeg becoming well known as the "Music Guy" at Connie's Corner Cafe. He helped with odd tasks there but more importantly he entertained patrons by playing his favourite country songs in the old Juke Box. Many hundreds of patrons enjoyed this unique service and have already begun to express missing the old music guy. The family's plan is for a traditional Metis funeral arrangement with a Wake scheduled for Wednesday, September 25, 2013. A viewing and short prayers at 7:00 p.m. The Funeral Service, delivered by Kateri Parish is set for Thursday, September 26 , 2013 at the Aboriginal Funeral Chapel, 724 Selkirk Avenue, Winnipeg at 10:30 a.m. with the procession to burial at Brookside Cemetery to follow thereafter. Flowers are welcome although people attending to the overnight Wake may consider bringing food items of their choice, tobacco, cribbage boards and cards, etc. for sharing with attendees instead. Entertainers/singers can contact the family to offer their performance. Pallbearers are as follows: Adam Foster, Johnny Ray Chartrand, Rafeal Chartrand, Shane Chartrand, Robert Scherban, Nathan Chartrand Honourary Pallbearers are Cory Foster and Ryan Chartrand The family would like to especially acknowledge and thank the doctors, nurses and caregivers at the St. Boniface Hospital, Parkview Place and Health Sciences Centre, all of whom provided kind medical and support services to our dear father. Aboriginal Funeral Chapel 204-586-7700