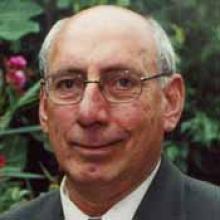 ANDREW (STANLEY) GARLINSKI Peacefully and surrounded by his loving family, our beloved father, grandfather ("pappa"), uncle, great-uncle, brother-in-law, godfather, cousin, and friend passed away on Sunday, September 22, 2013, at Concordia Hospital. Left to cherish his memory is his daughter Lisa (John) Sigurdson; son Brad (Sharlene) Garlinski; and granddaughter Abigail Sigurdson. Also mourning Stanley's loss are his sisters Anne Garlinski, Helen Sereda, Mary Morin, Fran Wasylishen, and Liz (Mike) Martyniuk; brothers Walter Garlinski, Mike Garlinski, and Ron (Sharon) Garlinski; sisters-in-law Anne Chudyk (Fork River, MB) and Anne Chudyk (Winnipeg, MB); and brother-in-law Peter Billay. Stanley will also be lovingly remembered by many nieces, nephews, godchildren, cousins, and friends. Stanley was predeceased by his wife Olga (nee Chudyk); parents William and Bessie Garlinski; sister Victoria Garlinski; brothers-in-law Bill Sereda, Tony Wasylishen, Lorne Morin; and sister-in-law Millie Garlinski. Stanley was born on March 3, 1940 in Gilbert Plains, MB. Growing up on the family farm, Stanley attended school in Gilbert Plains and at the Dauphin Collegiate. After moving to Winnipeg, Stanley was employed in various capacities with the Department of Highways. He joined the St. Vital Fire Department, and subsequently the Winnipeg Fire Department following amalgamation. Stanley retired with the rank of Captain in 1996, after 31 years of service. For many years, Stanley enjoyed completing home renovations, including shingling, painting, and carpentry. Even once retired, he continuously was called upon for jobs of this nature, given his excellent skills and knowledge. Stanley and Olga were married April 4, 1970. Together, they created a wonderful family home environment, putting their children's activities first. Stanley volunteered his time through coaching hockey and baseball, building sets for school plays, and served on various parish and school committees. Even before having children of his own, Stanley was the uncle who spent hours with his nieces and nephews, taking them on enjoyable outings. Stanley loved the outdoors, especially hunting and fishing. He also spent many hours working in the yard and the garage, fixing and repairing just about anything. Stanley enjoyed cooking meals, especially for his fellow firefighters, and baking Abigail's favourite treats. After Olga's passing, Stanley joined the Forester Recreational Club and the Teacher's Bowling League, carrying on his and Olga's favourite past times of bowling and playing cards. Stanley had a warm and loving personality, who was eager to help out family and friends. He was a hard worker, who prided himself on always providing for his family. He more recently loved his babysitting times with Abigail, whom he loved and cherished dearly. Stanley endured health challenges over the past year, which he faced with religious faith and much strength. He continued to live with determination until his passing. A Funeral Mass will be held on Friday, September 27, at 10:00 a.m. at Christ the King Church, 847 St. Mary's Road with Interment to follow at Glen Lawn Memorial Gardens. The family would like to thank Dr. Marianne Krahn and staff at St. Boniface CancerCare Manitoba, Dr. L. M. da Silva, and the wonderful staff involved with Stanley's care while at Concordia Hospital. Also thank you to the many family and friends who visited Stanley and supported our family during this time. In lieu of flowers, a memorial donation can be made to CancerCare Manitoba, 1160-675 McDermot Ave., Winnipeg, MB, R3E 9Z9. Dad and Pappa, we love you and cannot express how much we will miss you. You will always be in our hearts and lives and we will rely on your guidance from heaven in the years to come. It broke our hearts to lose you, but you did not go alone. For part of us went with you, the day God called you home. Vichnaya Pamyat Family and friends may sign a Book of Condolence at www.glenlawn.ca. Glen Lawn Funeral Home 204-982-7550