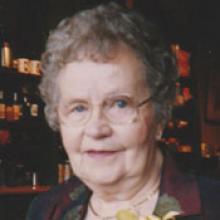 MILDRED EVELYN MACAULAY ANDERSEN (nee HOWARD) 1915 - 2013 It is with heavy hearts the family of Mildred MacAulay Andersen announce her peaceful passing on the morning of September 25, 2013 in Morden, MB at the age of 97 years. She leaves to mourn her husband, Chris Andersen and her children, Bob (Pat), Lloyd (Allison), Dave, Joyce and Doreen (Peter), stepson, Ernest (Trish), her 14 grandchildren, 14 great-grandchildren and numerous nieces and nephews. Mildred was predeceased by her husband of 54 years, Neil MacAulay, her brothers, Bert, Eddie, Walter, Milton, Sherwood, Fred, Arthur and sisters, Ada Loewen, Marion Jarvie and Eleanor Buchanan. Born in 1915 in Crystal City, MB Mildred moved from the Howard family home in 1936 when she married Neil. They settled on their homestead west of Pilot Mound where they began to grow their family with the arrival of Bob in 1937. Four more children followed to fill their happy, busy farm home. And the crops grew, the cows mooed, and the seasons changed. Mildred and Neil retired from the family farm at Pilot Mound and moved to Morden in 1987. Neil's health began to fail and he passed away in 1990. Mildred met Chris Andersen in 1992 and a close friendship soon grew. They celebrated their 11th wedding anniversary on Saturday, September 21 of this year. A woman of great strength and unwavering conviction, Mildred presided over her family with love, laughter and a determination of character seldom matched. Mildred's last years and days were happy ones spent doing the things she loved. She found great comfort in the companionship of others and in the routine she and Chris created and cherished. Viewing will be prior to the service. Funeral service will be held at 11:00 a.m. on Monday, September 30, 2013 at St. Paul's United Church 353 Thornhill St. in Morden with interment to follow at Pilot Mound Cemetery. If friends so desire, donations may be made in Mildred's memory to either the Salvation Army or to the MS Society. Wiebe Funeral Chapel, Morden In care of arrangements, 204-822-4755 wiebefuneralhomes.com