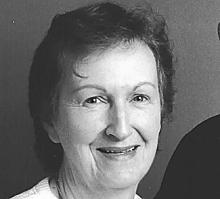 EILEEN ALICE BAVERSTOCK (nee BUTLER) February 11, 1934 - September 29, 2013 It is with great sadness that our family announces the passing of our dear mother and grandmother, Eileen on Sunday, September 29, 2013 at the age of 79 years. Eileen is survived by her daughter, Terry Bachman (Ken); sons Bob (Vicki) and Rick (Krista); grandchildren Michael and Sharon Baverstock; Ron, Rob, Jackie and Randy Bachman, Nate and Macy Baverstock; as well as by her sister Muriel Laing; brothers Norman and James Butler; one niece and several nephews. She was predeceased by her loving husband of 52 years, Bob; parents Everett and Annie Butler; brothers Albert and Gordon Butler; sister-in-law Roweena Butler; and nephew Jim Butler. On February 11, 1934, Eileen was born in Winnipeg. She spent her early years in Winnipeg and attended Brittania School. After she finished school, she worked briefly for her brother at Butler Brothers and then as a secretary for John Irvin and Sons. Eileen married Bob Baverstock on March 28, 1953. They raised their first two children in the St. James area and then moved to Beausejour in 1961, where their third child was born. Eileen worked side by side with her husband Bob, operating the Petro Canada station in Beausejour. After retiring she loved working in her flower gardens. Eileen was a terrific mother and grandmother, always putting others before herself. Her husband passed away in November 2005 and it was a loss that affected her deeply. She was diagnosed with Multiple Myeloma, which ultimately led to her demise. She fought a courageous battle right to the end. In compliance with Eileen's wishes, there will not be a Funeral Service. We would like to thank all the ladies at Concordia Oncology in Winnipeg for their compassionate care of our mother. Richard Wojcik of Wojcik's Funeral Chapel & Crematorium, Beausejour, is in care of arrangements. wojciksfuneralchapel.com, 204 - 268 - 2263. Eileen will be sadly missed. Be at peace Mom.