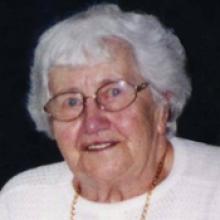 KATHY PETERS Kathy Peters went to be with her Lord Jesus peacefully on October 5, 2013 at Boundary Trails Hospital after a brief struggle with cancer. She was 89 years old. Mom was born June 28, l924 at Kronstal, Manitoba. She was the oldest of six children. She was baptized on June 28, 1945. As a young girl, mom worked many hours on her parent's family farm. From there she moved to Winnipeg and worked as a housekeeper for a family on Wellington Crescent. She told us many stories of her experiences and adventures with this family and living in the big city. Mom married Frank D. Peters on October 30, l948. They lived in Gnadenthal and farmed there until they moved to Winkler in 1992. They were blessed with eight lively boys and two sets were twins five years apart. Mom always told the story of how the twins actually rocked themselves in unison on a sofa since no one had time to hold them. Another story of the twins was that you could walk into the room and they would be talking to each other in their own language which no one could understand but them. Mom spent many hours washing diapers and clothes, it was often said that there were over a hundred diapers hanging on the line. She also took care of a huge garden which included up to 14 apple trees. Mom spent many hours cooking and canning to feed her large family, and despite all her hard work she still managed to maintain a cheerful, happy spirit. She looked forward to when the grandchildren came to visit and enjoyed cooking supersized meals for everyone! Donuts and chocolate sauce became a definite favourite! She was also known to cook verenike and all the fixings within half an hour and have it ready for lunch. Mom and dad spent many winters in Hawaii. They both loved swimming, sun tanning and playing cards. Church was very important to mom on top of all her hard work at home she spent many hours volunteering in her home church. Faith was always central in mom's life. Her wish was always that her children and her grandchildren would come to know the Lord. The day before mom died she had a moment of clarity and told us that her wish was that her whole family read the book of Proverbs. Looking through her Bibles now we notice how well-worn they are and how much time she spent reading them. Many verses are marked or underlined in all of them. In 2009, living on her own in a big house was getting to be too much for her so she moved to Cedar Estates. Life slowed down for her and she spent a lot of time reading and looked forward to family coming to visit. Mom spent many years with a chronic cough which lead to her needing to be dependent on oxygen. This past July she was not feeling well and on August 20 she was admitted to Boundary Trails Hospital, where she was diagnosed with bladder cancer. She was predeceased by Dad in July 1999, sons Garry in 1982 and Robert in 1984. She will be greatly missed and lovingly remembered by her children, Ken and Lynn, Clarence and Elaine, Velvet, Gordon and Marlene, Cliff and Sue, Terry and Deb, and Charles and Sharon, 10 grandchildren and nine great-grandchildren. Also surviving her are siblings Abe Kehler, Bill and Rose Kehler, Maryanne Derksen, Diedrich Friesen, Justina Harms also Tina Peters, Mary Fehr, Susie and Peter Harms and many nieces and nephews. We as a family would like to thank the hospital staff and those who came to visit mom. Mom especially appreciated the prayers for her and her sister Maryanne's Noodle Soup. Thank-you also to Wiebe's Funeral Home, ministers, and the serving group. The funeral service will be held Thursday, October 10 at 11:00 a.m. at the Winkler Bergthaler Mennonite Church in Winkler with interment to follow at the Winkler Cemetery. In lieu of flowers, donations can be made to The Gideons. Mom we will miss you but we rejoice with you! We hope the donuts in heaven taste as good as yours did! Wiebe Funeral Home, Winkler In care of arrangements, 204-325-4201 wiebefuneralhomes.com