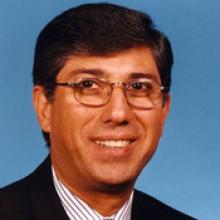 DR. REDWAN MOQBEL With grieved hearts we announce the passing of our dearly loved Redwan (Ridvan) Moqbel on 9 October 2013 in Winnipeg after a protracted battle with cancer. Born in a border town on the Iraq/Iran border (14 August 1947), Redwan's family history is linked with the earliest days of the Baha'i Faith. Redwan served the Baha'i community in the UK and Canada in volunteer capacities, including as a member of the national governing council of the Baha'i community of the United Kingdom for 13 years. Redwan was a speaker of rare eloquence, clarity and depth whose spiritual beliefs were firmly anchored in Baha'u'llah's writings and whose abundant humour was never at the expense of others. His life-long focus was on creating unity. He loved everyone but particularly youth, whom he mentored on three continents. In confirmation of his efforts, Redwan received the Lieutenant Governor of Manitoba's Award for the Advancement of Interreligous Understanding in January 2013. In 1976, Redwan obtained his PhD at the University of London, UK (LSH & TM). He became a faculty member there at the National Heart and Lung Institute in 1980. He was among the first to identify the immunological cell types that regulate asthma and allergy. Recruited to the Department of Medicine, University of Alberta as a Professor in 1995, he served as the Director of the Pulmonary Research Group. There he received such prestigious awards as Alberta Heritage Medical Senior Scholar, Heritage Scientist and Heritage Senior Investigator. In 2008, Redwan became Professor and Head of the Department of Immunology at the University of Manitoba, and Professor Emeritus at the University of Alberta. He was well recognized for his mentorship of young biomedical scientists, whom he encouraged to adopt "a noble goal." An international authority on the immuno¬molecular basis of asthmatic inflammation, in particular the role of eosinophils, Redwan's research garnered him numerous distinctions and awards. The International Eosinophil Society, of which he was a founding member, awarded him their highest honour, The Paul Ehrlich Award, named a mentoring award after him, and further honoured him with the prestigious Service Award in recognition of his "cardinal leadership" and innovative research. A recent example of his work as a champion reconciler was his role in organizing a scientific conference in which protagonists in the controversy over Lyme Disease came together in an atmosphere of mutual respect. Aggressive treatment for sinus cancer in 2006 resulted in a cure for Redwan, but from 2009 he suffered recurrences with metastatic lung and chest wall cancer. He accepted his ordeals with gratitude, grace and fortitude. Left to cherish his memory are his wife, Shar Mitchell, Redwan's son, Sam Moqbel, (Amy and grandsons, Thomas and Evan), Redwan's daughter, Marianne Greenhowe, (Gordon and grandson, Oliver), Shar's father, Jack Mitchell, Shar's children, Gabriel Lenz, (Erica Carlisle), Colby Lenz, Asher Lenz, (Emily Dragoman), Redwan's brother, Sarmad, his sister, Sharaf, their families in Iraq, and hundreds of friends worldwide. Interment will take place at St. Vital Parish at 826 Crescent Drive on 15 October at 2:00 p.m. A celebration of Redwan Moqbel's life will be held the same day at 7:30 p.m. in the Provencher Room at the Fort Garry Hotel, 222 Broadway Avenue. In lieu of flowers, contributions can be made to The Canadian Lyme Disease Foundation, (www.canlyme.com), 9131 - 118th St., Edmonton, AB T6G 1T6 or CancerCare Manitoba Foundation, (www.cancercarefdn.mb.ca), 1160 - 675 McDermot Ave., Winnipeg, MB R3E 0V9. Riverview Health Centre Foundation (3E) Palliative Unit (http://www.riverviewhealthcentre.com), 1 Morley Ave., Winnipeg, MB R3L 2P4