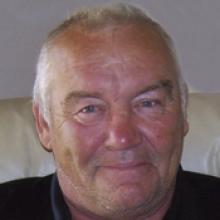 TERRANCE WAYNE DELL 1952 2013 On Wednesday October 16, 2013 at his residence in Morden, MB, Terry Dell, aged 61 years passed away suddenly. He leaves to mourn his passing one daughter, Rachel Dell of Morden, one son, Kurt and Cortney Dell of Winnipeg and three grandchildren. He was predeceased by his wife, Margaret in 2011. Viewing will be from 7:00 p.m. until 9:00 p.m. on Sunday, October 20, 2013 at Wiebe Funeral Chapel, 1050 Thornhill St. in Morden. Cremation to follow. Memorial service will be held on Wednesday, October 23, 2013 at 2:00 p.m. at St. Paul's United Church in Morden with ash interment at the Chapel Cemetery Columbarium in Morden. In lieu of flowers, donations may be made in Terry's memory to the South Central Cancer Resource at 2-160 Stephen St. Morden, MB R6M 1T3. Wiebe Funeral Chapel, Morden in care of arrangements, 204-822-4755 www.wiebefuneralhomes.com