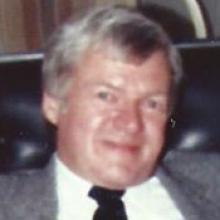 CHARLES (CHARLIE) ALEXANDER HOOEY May 28, 1930 - October 2, 2013 Sadly, we share with family and friends, the passing of our much loved and admired, Uncle (Bud) Charles, at Oakview Place, Winnipeg, from pancreatic cancer. Charlie Hooey was a retired, celebrated Manitoba Government employee, Boy Scout pioneer and leader, outdoorsman, collector of classical music, amateur filmmaker, researcher and published biographer ... and a kind, unassuming, caring person whose greatest loves were his family and friends. Until February, Charlie lived his entire life in the family home at 730 Minto Street, Winnipeg. He was the youngest of the three children of Hamilton and Meredith Hooey. Brother Jim was a Canadian Flight Officer lost in a bombing mission over Burma in 1944; sister Jean passed away at 79 years. Charlie attended Daniel McIntyre Collegiate and United College (BA October, 1954). This was followed by a distinguished 36 year career with the Government of Manitoba - the Department of Industry and Trade and the Department of Natural Resources, retiring on August 19, 1991. In his 20s and 30s Charlie devoted much of his personal time to the Boy Scouts organization in Winnipeg, ending as Strathcona District Commissioner. He was a co-founder of Camp Alloway on Big Whiteshell Lake and introduced Scouts to winter camping. Throughout his Scouting years, he made hundreds of 8 mm films. In his later years, he converted many of his films to DVDs, narrated by him - a legacy that recognizes him as an inspirational leader and innovator. Charlie's passion for the outdoors extended beyond Scouting. For decades he explored the backcountry of Manitoba. By canoe and portage he experienced and filmed some of the most isolated and spectacular rivers and lakes in the northern Manitoba wilderness - places seen only by Charlie and a few other non-Aboriginal people. Charlie's other passion was his love of Opera. He was a longtime patron of The Manitoba Opera. During the last 50 years of his life he built an extraordinary collection of 20,000 pieces of opera and classical music. Of more value to Charlie than the music, were the friendships that he developed with scores of similar international music lovers. Charlie's love of music led to researching, writing and publishing more than 35 biographies of early 20th century opera performers. Some of his published work can be found on the MUSICWEBINTERNATIONAL website and in the British publication, The Record Collector. His writing is another legacy that will be a continuing source of reference and pleasure for many years to come. In the end we believe that his most cherished rewards were the friendships of the people he met during his life's journey. Charlie is survived by nieces Linda Waverick (Gerald) from White Rock, BC, and LaVerne Burns (Russ) from Oceanside, CA, nephew Wayne Matheson (Leslie) from Victoria, BC, and 10 great-nieces and nephews. It is difficult to comprehend that Uncle Charlie's presence here on earth has ended, after a lifetime of adventure, loving memories, and of course THAT wonderful grin! Our comfort comes from knowing that he is once again embraced in the loving arms of his parents and brother and sister. Our sincere thanks to Oakview Place and the many care givers who provided comfort and care to Charlie for these last few months. No service by request.