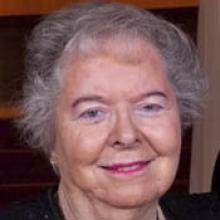 CLAIRE (CLARA) DVERIS (MILES) 1922-2013 Claire passed away peacefully on September 26, 2013 at 90 years of age. She was predeceased by her parents, Esther and Jacob Miles, husband Dave, son Gregory, sister Ceila Craman (Sam), brothers Nate, Richard, and George Miles. Claire is survived by her identical twin sister Anne Gutterman, sons Marty (Linda), Ron and Jeff; grandchildren Adam (Shari), Sean (Courtney), Cara, Shira, Reynoldo, and great-grandchildren, Sadie, Joseph and Daniel. Born in the North End of Winnipeg, Claire attended the University of Manitoba and graduated from Home Economics. She married the love of her life Dave in 1946, and were together for 65 years until Dave's passing 2011. Together they had a wonderful life, spending summers at the family cottage at Winnipeg Beach, winters in Florida, and traveling much of the world. They had many life-long friends, and made many more throughout their travels. Claire was an unpretentious individual who always put others feelings before her own. Mom was soft-spoken, introspective, and a quiet source of comfort and wisdom. She had a deep spirituality that stood her in good stead throughout her life. Graveside Funeral services were held at the Shaarey Zedek Cemetery on Monday, September 30, 2013, presided by Rabbi Alan Green. Pallbearers were Adam, Sean, Cara, Shira, and Reynoldo Dveris, and David Miles. The family would like to thank Palliative CancerCare, and special thank you to her care givers Gloria Inocencio, Rowena Ilagan and Esther Daga. Donations can be made in Claire's honour to the Claire and Dave Dveris fund at the Jewish foundation of Manitoba or a charity of your choice.