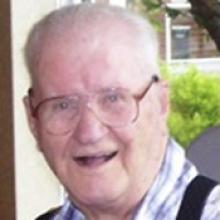 RONALD MORRIS BEAN 1922 - 2013 We celebrate the life of a much loved husband, father, grandfather, great-grandfather, as well as many other distinctions that gave Ron a long and fruitful life of 91 years. He is survived by his wife of 69 years, Margaret, three children, seven grandchildren, and 10 great-grandchildren, all of whom he loved and cherished dearly. Albert Thomas Bean (Debbie) children; Ronald Bean (Kim) sons David and Logan; Deanna Cameron (Chris) sons Gavin, Jaxon, and Hudson. Brenda Margaret Loveridge (Keith) children; Gareth (Ann) sons Oliver and Simon; Julie Loveridge-Marks (David). Brian Edward Bean (Karen) children; Douglas daughters Isabelle and Payton; Roberta; David (Erin) daughter Haley. Ron will also be warmly remembered by our large extended family and many friends whose lives and hearts he touched. Ron spent 36 years of his life as a teacher in Oak Point, Swan Lake, Fairfax, Dundurn, East Kildonan, Stonewall, and finally back to Winnipeg and Munroe Junior High where he retired in 1977. His effectiveness as a teacher was reinforced when at retirement many of his former students praised his guidance and his patience. Ron was very involved in the lives of his family and friends, as well as being very active in many community initiatives, as well as coaching and participating in sports teams throughout the years. He was an avid curler and later a serious senior 10 pin bowler, as well as an occasional golfer. After retirement, Ron took up woodworking classes from his youngest son and went on to build many heirlooms for his family and friends to cherish. Retirement also included extensive world travel with Margaret and a much remembered trip with his grandchildren to Disneyland where the grandchildren remember how hard it was to keep up with grandpa. In 2002, Ron and Margaret moved into Lindenwood Manor. The family wishes to thank the staff and residents of the manor for the care and kindness Ron received during the many years he lived there, especially in his final days. Ron will be deeply missed by his family but leaves us with memories of a life well lived. It was Ron's request that no memorial service be held but that all who wished could make a donation to CancerCare Manitoba. NEIL BARDAL FUNERAL CENTRE 204-949-2200 neilbardalinc.com