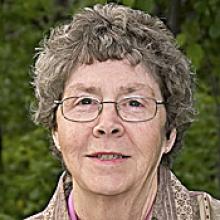 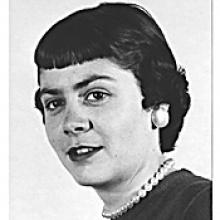 BEVERLEY MAE TREBLE (ROBINSON) July 20, 1937 - October 26, 2013 With family at her side, Beverley Mae Treble died peacefully on October 26, 2013 at Pilot Mound Personal Care Home. Bev is survived by daughter Margaret Anne (Gaétane); son, William James (Roxanne), granddaughters Courtney, Lauren and their mother Laurie Treble (Eyford); son Cecil David (Susanne), grandson Zach and granddaughter Sofie; Douglas John (Carrie), granddaughters Jamie and Mya; her brothers, David and Alex (Pauline); sister-in-law Ruth Brunner; and many nieces, nephews and cousins. Predeceasing Bev were her husband James Hunter Treble; parents Percy Clifford Robinson and Adelaide Agnes (Donaldson); brother Gordon Robinson; sister-in-law Ebba Robinson (Nielsen), and sister-in-law Annette Treble. Mom was born July 20, 1937 in Bowsman, Manitoba. After high school, she moved to Winnipeg where she worked as a clerk before enrolling in the Children's Hospital of Winnipeg School of Nursing, graduating with the class of 61. On December 9, 1961, she married Dad at St. Andrew's United Church in Swan River, Manitoba. Mom and Dad moved to Crystal City where she continued her work as a nurse at the Crystal City Hospital from 1962 to 1967. Mom was very active in the community and was an avid curler. She spent many hours volunteering her time in leadership roles with the United Church, CGIT, UCW, WI and 4-H. Mom spent over 30 years with the 4-H organization, first as a member and then as a leader at both the local and provincial level. She volunteered with the Manitoba 4-H Foundation and served a term as Manitoba 4-H Council President in 1986. She ended her long tenure with 4-H in 1993 after 30 years as a leader, the last few years spent assisting with the development of the 75th anniversary history book and compiling a small history of the Pilot Mound 4-H District. Mom's love of local history and research led her to assist with the compilation of "Echoes of the Past" and "Prairie Pride Land" community history books. She served as Chair of the Crystal City Printing Museum from 1991 to 2008. Mom also loved contacting close and distant relatives for her work on the Robinson and Donaldson family histories. Mom had a gift for sewing. She spent hours in her sewing room, making clothes, jackets, mending and hemming for her family and friends. She also loved to bake and was forever making muffins, pies, cookies and other goodies that we all miss so much. Despite her busy schedule, she always found time for her family and friends and loved visits with her grandchildren. Many have been touched forever by her selfless generosity, kindness and unconditional love. Cremation has taken place. A memorial service will be held at 2:00 p.m. on Saturday, November 2, 2013 at Crystal City United Church with Emily Lovell officiating, interment to follow at Crystal City Cemetery. The family would like to thank Dr. Khoury, all the staff of Pilot Mound Personal Care Home, Prairie View Lodge, and homecare providers, for their support and care. If friends so desire, donations may be made to: Rock Lake Health District Foundation (Alternative Care Unit), P.O. Box 130, Crystal City, MB R0K 0N0, Crystal City United Church, P.O. Box 160, Crystal City, MB R0K 0N0, or a charity of your choice. WHEATLAND FUNERAL SERVICE (204) 825-2848