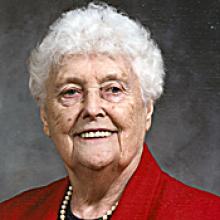 MARION FULTON (nee TYE) It is with great love and heavy hearts that we say farewell to our Mom, Grandma, and Great-Grandma. Marion passed away peacefully on November 4, 2013. Marion Fulton (nee Tye) was born in South Kirkby, Yorkshire, England on March 5, 1921, grew up in Pontefract and was trained at York County Hospital where she became an RN in February, 1943. She met Victor Fulton, an RCAF Flight Lieutenant, at a dance, and they were married in South Kirkby, England on October 16, 1943. Their eldest of three sons, Craig, was born in 1944. Marion, with all her strength and independence, took Craig and made the journey from England to Pier 21 in Halifax along with thousands of other war brides. From Halifax they made their way west by rail to Winnipeg and subsequently to Birtle, where they were later joined by Victor after the war to start their farming life. They later had two more sons, David and Sheldon. She continued to practice nursing at the local Birtle Hospital and was involved with youth work as a Brownie leader and Sunday School teacher. Shortly after arriving in Canada, she became a member of the Women's Institute. She was then elected President of the Manitoba Women's Institute, the Federated Women's Institute of Canada and the Vice-President of the Associated Country Women of the World. This led to extensive national and international travel and she made friends from all over the world. In recognition of her contributions to community and country she was made a Member of the Order of Canada in 1978, and in 1988 she was inducted into the Manitoba Agricultural Hall of Fame. She was a great supporter and very active in the Birtle United Church. Marion was predeceased by her husband, E. Victor Fulton, her parents, Walter and Mary Tye, and her brother Douglas. She is survived by her sons Craig (Judith), David (Verna) and Sheldon (Lillian), her 12 grandchildren (who are all grateful for her generous contributions to their educations), 16 great-grandchildren (who simply called her "Great"), and sisters-in-law, Eva Robinson, Margaret (Peggy) Fulton and Mary Tye. The Funeral Service will be held on Saturday, November 9, 2013 at 2:00 p.m. from the Birtle United Church, with Rev. Norman Velnes officiating. Interment will follow at the Birtle Cemetery. Donations may be made in lieu of flowers to the Manitoba Women's Institute MWI Forever Fund, at MWI, 1129 Queens Avenue, Brandon, Manitoba, R7A 1L9. To make a donation online visit www.mbwi.org/donate. Remembrances and condolences may be emailed to bbfs@mymts.net Braendle-Bruce Funeral Service of Russell, Manitoba in care of arrangements. (204) 773-2747