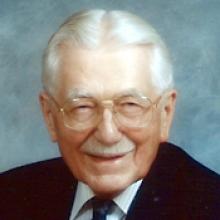 SIR JOSEPH C. STANGL, KSG, CM March 11, 1919 - November 10, 2013 Peacefully, with family by his side, at Misericordia Place, November 10, 2013, our beloved father, grandfather and great-grandfather passed away. He has left us to join his dearly missed wife Kay. He will be forever cherished and missed by his daughters: Judith (Ron McGavin) and their children Cameron (partner Mel and his son Rob), Michael and Lori; and Joanne Hunt and her children Kyle (Kim Penner), Ryan and stepdaughter Tracey Groening (Rod, Cody, Whitney, Kipton, Hudson). We all hold dear the memories that have been created over the years. He was predeceased by his loving wife Katherine in 1997; special son-in-law Jim Hunt in 2006; his mother and father, and siblings Frank, Mary, Vera, and Sister Benedicta. Joe was born in 1919 in Quantoch, SK. He completed his education at college in Battleford. In 1937 he moved to Winnipeg in search of a job and found and married the love of his life, Kay (Katherine Mary Ottenbreit) on October 26, 1940. In 1943, they moved to Saskatoon where their first daughter, Judith was born. After seven years in Saskatoon, the family moved back to Manitoba and settled in Norwood and Holy Cross Parish in 1950. Several years later their second daughter, Joanne was born. Joe resided in Norwood until March 2011. Joe began his adult life as a business man in the private sector with Crane Supplies and Anthes Imperial. Due to his good fortune and success with this company he was able to retire in 1968 at age 49. This permitted him to embark upon a lifetime of volunteering his talents in the interests of others, becoming Secretary-Treasurer at St. Paul's High School for 13 years, where he was duly recognized. Joe has distinguished himself as an outstanding Catholic layman in the community and a model of Christian living. He joined the Knights of Columbus in 1943 in Saskatoon, transferred to Winnipeg Council in 1950, and was a founding member of the Norwood Council. He "served" in the true sense of the word, as Manitoba State Deputy and Master of the 4th Degree Knights of Columbus Manitoba State Jurisdiction, and also held various positions on the Manitoba State Board. Joe was active in his parish and numerous Catholic organizations, resulting with him being honoured with a papal Knighthood - Knight of St. Gregory the Great (KSG) in 1958. His involvement in numerous community projects and causes, combined with his ongoing participation in education, resulted in Joe receiving the Queen's Commemorative Medal in 1977 and the Order of Canada (CM) in 1979. In 1980 the Canadian Council of Christians and Jews honoured him with the Human Relations Award. He was an active member of the planning committees of the papal visit in 1984. Joe was very humbled to meet his Holiness Pope John Paul II and to receive his blessing. Educational interests in Joe's life have been twofold. Joe became involved locally, provincially, nationally and internationally, in public and independent school education. He took on the challenge of the long-standing Manitoba School Question, and both independent and public schools in Manitoba have benefited from his active dedication to education. Joe found time to pursue recreational activities as a supporter of the Royal Winnipeg Ballet, the Blue Bombers, St. Vital (where he scored an eight ender) and Fort Garry Curling Clubs; and Niakwa and Elmhurst Golf and Country Clubs. Joe and Kay travelled extensively throughout North America, Europe, Russia and Africa. His grandchildren have fond memories of him cheering for their teams at all their sporting events, and of his particular interest in the eyesight of the referees. Joe published his memoirs, Life's Challenges: A Man for Others in 2002. His main objective in writing his story was to encourage people to give of themselves for others. He believed that with "determination, persistence and commitment, anyone could achieve similar results". The greatest gifts we give people and members of society are our love and our time. And while his dedication and commitment to others was very evident, his love for family and friends was first and foremost in his life. Charity involves giving of one's time and energy and Joseph's life has been a dedication of his personal time to religious, educational, political, community and social organizations. Joe's family would like to thank the staff of Misericordia Place for the kindness and caring they provided to Joe and his family, enabling him to die with dignity. Pallbearers will be Joe's grandchildren. Viewing will commence at 12:30 p.m., followed by a celebration of Joe's life at 1:00 p.m. at Holy Cross Parish, 252 Dubuc Street on Friday, November 15, 2013; reception to follow in the church hall. Flowers gratefully declined. For those who wish, donations may be made to The Catholic Foundation of Manitoba, 622 Tache Avenue, Winnipeg, MB R2H 2B4, or Siloam Mission, 300 Princess Street, Winnipeg, MB R3B 1M3. Dad your guiding hand and loving smile will remain with us forever. Cropo Funeral Chapel, 204-586-8044