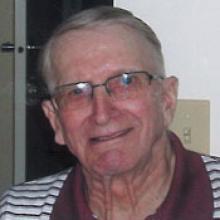 ROBERT EASTMENT GREEN Robert Eastment Green passed away peacefully in Dauphin, at the St. Paul's Care Home, on Thursday, November 7, 2013 at the age of 82. Bob was born January 3, 1931 in Tuberose, SK to James and Emily (Rowlett) Green. The family moved to a farm in the RM of Dauphin in 1950. Bob was employed at Dennison Motors. While working here he received his journeymen heavy duty mechanics certificate. Meeting the love of his life, Iona MacDonald, they were married in Dauphin June 17, 1953. They mixed farmed on the MacDonald farm at Ashville. Bob started his plumbing career while continuing to farm. In 1975, Bob and Uncle Cholt built their new home in Gilbert Plains. From here he continued his plumber career until his heart attack in 1988. While recovering from his heart attack, Bob started making miniature Churches and Elevators from the area. They can be seen at the Gilbert Plains Museum. In 2009, Bob and Iona moved to Kinsmen Villa in Dauphin. In 2012, because of health reasons, Bob moved to St. Paul's Care Home. He was a trustee for Vista School and served on the Gilbert Plains Hospital board. While living in Gilbert Plains he served on the St. Paul's United Church Board, as well as the Sunset Lodge, and as chairperson on the Burrows Government Housing. In the summer he enjoyed camping and fishing at Lake of the Prairies, golfing, working at the gates of the Gilbert Plains Fair and gardening. He also enjoyed singing in the United Church choir. He rarely missed phoning someone on their birthday or anniversary. After his heart attack Dad and Mom took up treasure hunting whether it was garage sales or auction sales there was always something added to the basement shelves, which he proudly showed off. Throughout their years they also traveled far and wide. Whether it was going up north fishing with the Hays or traveling south with the Hales. Bob leaves to cherish with many fond memories his loving wife, Iona, of 60 years, daughters: Nola and husband Bob Crawford, sons: Chris and wife Brandi, children Keelin, Tia, and Sadie, Blake and wife Tanya, daughter Mya; Ila and husband Don Condie, daughters, Letitia and husband Jason Yurkewich, Jenilee and husband Scott McFadyen, and son Beck. Also surviving are four brothers: Jim (Mary), Lyle (Chris), Floyd (Elaine) and Bill (Joanne); his sister Beryl (Bill Stokotelny), and numerous nieces and nephews. Funeral service will be held on Monday, December 9, 2013 at 11:00 a.m. from the Dauphin First United Church with Rev. Larry McPhail officiating. Flowers gratefully declined, if friends so desire memorial donations may be made to the St. Paul's Care Home, Dauphin. Sneath-Strilchuk Funeral Services Dauphin, Manitoba 1-877-243-4459 www.sneathstrilchuk.com