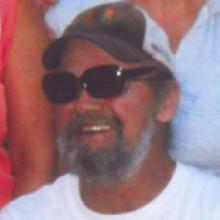 RANDY PORTER Randy Porter was born December 27, 1953 in Winnipegosis, Manitoba and passed away on November 16, 2013 in Dauphin, Manitoba. Son of, and predeceased by, Kenneth Porter and Thora (Johnson) Porter, and brother Lindsay. Randy is survived by his brothers, Stoni and wife Judy, Ken, Bev and wife Eunice, Don and partner Rosemary, Michael and wife Tammy; sisters, Shaunda and husband Dennis, Kim and partner Richard, and many numerous aunts, uncles, nieces, nephews and friends. Funeral service will be held on Friday, November 22, 2013 at 11:00 a.m. at the Winnipegosis Elks Hall, with lunch following the service. Pallbearers will be Stoni Porter, Ken Porter, Bev Porter, Don Porter, Michael Sass and Dennis Wiebe. Randy was taken from us battling Cancer over the past year. Randy will be surely missed by loved ones and friends, but will be always in our hearts. In lieu of flowers, donations can be made to CancerCare Manitoba. Sneath-Strilchuk Funeral Services Dauphin, Manitoba (204) 638-4110 www.sneathstrilchuk.com