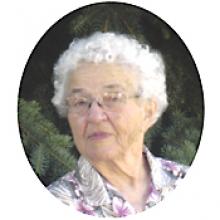 BERTHA NEUMANN Peacefully in her sleep, mom passed away November 23, 2013 at Country Meadows Care Home, Neepawa, MB; 15 years to the day after dad died. She was born in the parsonage in Whitemouth, MB to Martin and Anna Voss in 1922. As a preacher's kid, mom was the organist for many of her father's church services as soon as she could work the pedals on the pump organ. As a clergy family, they moved often; first to Tenby, MB, then to Irvine, AB. This is where mom finished public school, before attending Normal School in Calgary, as teacher training was called in those days, and yes, she had a certificate that said "Normal". She taught for three years in a log cabin school in Neerlandia, AB, then in Winnipeg for two years at Pinkham School. During her time there, she met Heinz at a church function at Waldersee and the rest is history. They were married July 11, 1947. Mom was one of the last of the farm women who ran a household and helped run a farm without the benefit of electricity and running water. It is for us today to imagine life with a wood cook stove, an outhouse, and a cistern pump. Farm life in the 1950s involved massive gardens and supplying most of the needs of a growing family yourself. With roads not being what they are today, a winter storm could make for extended periods of isolation. This made small rural communities rely on each other much more than they do today. Sadly, we have lost much of this sense of community. Mom and dad continued on the farm until 1981, when they built a house in Neepawa and retired there. Mom was a tireless volunteer in many community organizations in both Waldersee and Neepawa, including time as church organist, choir director, 4-H leader, Hospital Auxiliary and Retired Teachers Association. When she could no longer manage her own house and yard, she moved to Kinsmen Kourts, and lived there for nine years. Declining health led to a move to Country Meadows Care Home, in 2012. Mom was predeceased by her husband of 51 years, Heinz in 1998; also her two sisters Marie and Helen. She leaves to mourn her children Rick (Wendy) of Osoyoos, BC; Joyce (Bill) Eddy of Edmonton, and Gary (Lisa) of Waldersee; four grandchildren, Matthew and Christopher Eddy, Karl and Elise Neumann, one brother Henry Voss, and sister-in-law Trudy Boaler, both of Calgary. We would like to thank the care home staff for the wonderful care mom received. A Memorial service will be held in the Neepawa United Church, Neepawa, MB at 2:00 p.m. on Friday, November 29, 2013. In lieu of flowers, donations in Bertha's memory can be made to Country Meadows Personal Care Home, Neepawa, MB or Christ Lutheran Church, Waldersee, MB. White's Funeral Home, Neepawa, MB in care of arrangements, 1-204-476-2848