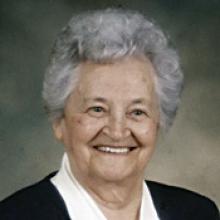 KATHERINA (KATJA) (KATIE) GOERZ (nee GOERTZ) 1916 - 2013 On Saturday, November 23, 2013 at Tabor Home in Morden, MB, Katie Goerz aged 97 years, formerly of Snowflake, went to her eternal rest. Her passing was peaceful and in the presence of family. She leaves to mourn her passing three daughters, Helga (Bill) Guenter of Winnipeg, Ingrid (John) Friesen of Morden, Anne (Len) Janzen of Morden, three sons, Harry (Dolores) Goerz of Williams Lake, BC, Eckhard (Joyce) Goerz of Winnipeg, Paul (Heidi) Goerz of Winnipeg as well as her daughter-in-law, Emily Goerz of Morden, in addition to 18 grandchildren and 32 great-grandchildren. She is survived by two sisters Mary Goerz of Winnipeg and Huldi Warkentin of Brazil. She was predeceased by her husband Jacob in 1997, son, Dietmar "Dick" in 2011, one infant son Manfred, and one great-granddaughter Holly. Katie was born in the Mennonite settlements of eastern Ukraine (then Russia) and grew up during the very restless period following theFirst World War. She lived through the Russian revolution and its aftermath, as well as the Second World War, through numerous, at times traumatic, dislocations, spending time in German refugee camps, Brazilian jungle settlements and occupied Polish farms, before being sponsored as Displaced Persons, with her husband and young family, to Canada in 1948. The family was welcomed in Canada by their community and church. Katie and her husband farmed for several decades in the Snowflake area before retiring to Morden, remaining active in church and community activities. Several winters were spent in California and south Texas. Katie spent her last years in Tabor Personal Care in Morden, limited by mobility and vision but always mentally alert, graciously engaging with friends and residents. The family would like to express sincere appreciation to the Home Care staff who assisted Mom while at home and also to those Tabor Home volunteers and staff who supported her, especially Karen Hamm and Dr Jackson, who provided such competent, gracious and dignified care to Mom during her later time. Viewing will be from 7:00 p.m. until 9:00 p.m. on Sunday at Wiebe Funeral Chapel, 1050 Thornhill St. in Morden and at the church prior to the service. Funeral service will be held on Monday, December 2, 2013 at 11:00 a.m. at Westside Community Church, 831 Thornhill St. in Morden with interment at Hillside Cemetery. If friends so desire, donations may be made in Katie's memory to the Tabor Home Building Fund, 230 9th St. South, Morden, MB R6M 1Y3, or to the Mennonite Central Committee, 134 Plaza Drive, Winnipeg, MB R3T 5K9. Wiebe Funeral Chapel, Morden In care of arrangements, 204-822-4755 wiebefuneralhomes.com