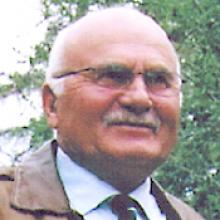 GORDON WILLIAM BEYAK It is with heavy hearts that we announce the sudden passing of Gordon Beyak on November 23, 2013. Besides his wife, Bonnie, he will be remembered by his Manitoba Daughters' Tamara, Tannis and Tracy of the Riverton area and his daughter Terry (Donovan) of Whitehorse, Yukon, daughter Shannon (Jason) of Port Moody, BC and grandchildren Braedan and Emma, as well as his son Michael Beyak of Whiehorse, Yukon; stepchildren Douglas Young and Tammie Watson, and mother-in-law Elva McDonald. Gordon was born in 1939, the eldest child of Mike and Marie-Ann Beyak. As a boy, he was raised at Salt Point on Lake Winnipegosis. The family home there was locally called Beyak Point. He helped his father with the cattle/sheep ranch and commercial fishing. Gordon had almost no formal education as he helped his father on the ranch while his younger siblings and mother moved to Winnipegosis to attend school. In his teens, the family moved to Churchill - then began Gordon's adventure in the North. Gordon delivered or worked in every state and every province except two Maritime provinces, three New England states, and Hawaii. (He explored Hawaii when Shannon was married there.) He operated heavy equipment, obtained a heavy-duty intra-provincial mechanics license, worked in many construction camps and hydro-electric dams in three provinces, drove several types of trucks and even ranched for a short time. This is just a short list. Gordon was a friendly, capable man who loved working. Failing health and memory with the resulting inability to work regularly, frustrated him. He still loved to entertain others with tales of his adventures and the pictures to prove them real. He had part of a book of memories taped, to be treasured by those who loved him. According to his wishes, Gordon's ashes will be scattered along the Yukon River that he loved. Wheatland Funeral Service (204) 523-7791 www.wheatlandfs.com