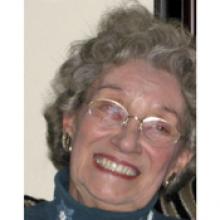 HELEN ANITA WOOLLARD (nee CURLE) Helen passed away peacefully on November 29, 2013, just two days after her 84th birthday, after a long struggle with Alzheimer disease. Helen was born in Winnipeg and grew up in St. James. She raised her family in St. Vital and later on resided in Springfield. Helen truly loved her Saint Bernard dogs. They provided her with love and companionship during her later years at her home in Springfield. Helen joined the Winnipeg Police Department in 1959, working at the Emergency Telephone Department. In May, 1960 she was promoted to a policewoman, being the first policewoman to attend a full regular recruit class. She was also the first policewoman in Winnipeg to wear a police uniform. Helen retired from the police force in December 1989 after a full 30 year career. Helen is survived by her son Russell (Linda), daughter Valerie, grandchildren, and sister Margaret Nicholls of Sarnia, Ontario. Her husband Russell and brother Johnny Curle predeceased her. The family would like to extend thanks to the staff of Tuxedo Villa Extendicare for their compassionate care they provided to Helen. Cremation has taken place. No formal service will be held. "She is free at last and will forever be in our hearts." Chapel Lawn www.chapellawn.ca 885-9715