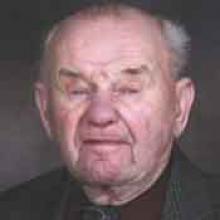 JOHN PETERS 1929 - 2013 Our Heavenly Father decided on Saturday, December 14, 2013, it was time for Dad to take his final breath and to be brought home to a place where there was no more suffering. Our Dad, Grandpa and Great-Grandpa passed away peacefully with his family by his side. Left to cherish his memory are his children, Lois and her husband, Jake Derksen and their three daughters, Amanda and Jason Pellegrino (Katelyn and Megan), Gina and Janesa Derksen; Marilyn and her husband, Larry Unrau and their three daughters, Stephanie and Russ Thiessen (Brody and Norah), Jolene Unrau, Candace and Ryan Landry (Saphira); Connie and her husband, Arden Bergstresser; Dad's brothers, Pete Peters, Henry and Lydia Peters, Abe and Barb Peters, Fred and Gloria Peters, Cornie and Linda Peters, Ben Peters and Dad's sisters, Susan Friesen, Mary Penner, Anne Enns, Tina Holenski, Trudy and Dave Derksen and two sisters-in-law, Nettie Peters and Esther Peters, as well as numerous nieces and nephews. John was predeceased by his wife, Ruth in 2008, his parents, two brothers, two sisters-in-law and four brothers-in-law. Viewing will be from 1:00 p.m. until 9:00 p.m. on Thursday, December 19 at Wiebe Funeral Chapel, 1050 Thornhill St. in Morden and at the church prior to the service. Funeral service will be held at 11:00 a.m. on Friday, December 20, 2013 at Morden Mennonite Church, 363 Gilmour St. with interment to follow at Southside Cemetery. As a family we would like to thank all the doctors, nurses and aides at Boundary Trails Health Centre for their care and compassion they gave Dad and our family. Thank you to the many family and friends who visited and supported us with prayers and kind words, we are deeply grateful. Although Dad's passing will leave a tremendous hole in our lives, we know that he has found his eternal home with mom. They are together at last. Till we meet again Dad, love you. Wiebe Funeral Chapel, Morden In care of arrangements, 204-822-4755 wiebefuneralhomes.com