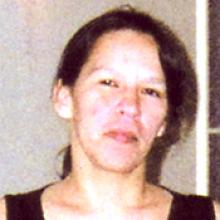 VIOLA MCKAY December 9, 1965 - December 17, 2013 With the love and comfort of her family around her it is with great sadness that we announce the passing of our beloved mother, wife, daughter, nanny, sister and friend on Tuesday, December 17, 2013 at St. Boniface Hospital. She was predeceased by Floyd Cameron; dad Robert (Bob) Wilson; father John McKay; sister-in-law Karen Cameron; brother Norman Cameron and father-in-law Richard Cameron as well as two nieces Katherine and Shanlee. She is survived by her loving husband Les Pitt; mother Yvonne Wilson; daughters Cheyanne McKay (Karl), Celeste, Krislyn; sons Greg, Brad, Sean and Andrew; grandchildren Kota, Ashlyn, Mason, Shayla, Jailyn, A'Mayah and Zach; sisters Fran (Jim), Margret (Chris), Vikki (Dale); brothers Richard (Catherine), Arthur, Chibby (Kelly); nieces and nephews, Craig, Patrick, Melissa, John Robert, Prairie Dawn, Matthew, Nicole, David and Tyson; too many friends to mention, and of course her girls Baby and da Moemoe. A special thank you to all the nurses in the MICU for taking such good care of her. She was always there for everyone not only a loving mother to her children and grandchildren but a mom and aunty to anyone who needed. She was the rock of the family and is going to be greatly missed by all who knew and loved her. Viewing will be held on Thursday, December 19 from 7:00 p.m. to 9:00 p.m. at Aboriginal Funeral Chapel, 724 Selkirk Ave. at Parr Street. Service will be held on Friday, December 20 at 10:00 a.m. also from the Chapel. Interment will follow at Elmwood Cemetery. "Keep me in your heart for awhile" ABORIGINAL FUNERAL CHAPEL (204) 586-7700