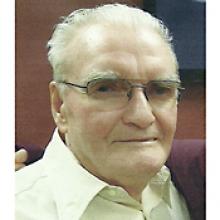 ARMAND BENOIT NAULT Peacefully with family by his side, Armand Benoit Nault passed away on Saturday, December 14, 2013 at the Victoria Hospital in Winnipeg at the age of 82 years. He leaves to mourn his passing and cherish many fond memories; his loving wife, Rolande, his daughters, Linda (Tom) Henry, Patricia (Brad) Mowat, his stepchildren, Mona (Lynn), Guy (Christina), as well as 12 grandchildren and 10 great-grandchildren. Armand was predeceased by his parents Phil and Nella, and his sister Helen. Prayers were offered on Wednesday, December 18 at 10:30 a.m. with the funeral mass following at 11:00 a.m. from Ste. Rose de Lima Roman Catholic Church in Ste. Rose du Lac, Manitoba. Fr. Leo Fernandes celebrated the mass with interment in the Ste. Rose Cemetery. Pallbearers were his grandson Myles Mowat, his granddaughter Katelyn Mowat, his sons-in-law Tom Henry and Brad Mowat, Joe Bouchard and Leonard Janssen. Armand's family would like to sincerely thank the supportive staff at the Victoria Hospital. In lieu of flowers, donations may be made to a charity of your choice. Sneath-Strilchuk Funeral Services, Ste. Rose Chapel in care of arrangements, 204-447-2444, www.sneathstrilchuk.com