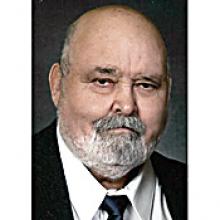 MAURICE EDWIN GALLANT July 7, 1937 - December 17, 2013 Peacefully, surrounded by family, Maurice, Dad, Papa and Papa Moe passed away at age 76. Left to cherish his memory is his loving wife of 57 years, Darlene (Gemmill), their children, George (Lori), Patti (Don), Michelle (Doug), grandchildren Ryan, Denise, Marcus, Justine, Dane, Erin, and great-grandchildren William, Emily, Isabella, Holden, and Claire. Maurice will be missed by sister Eva, and his brother and sisters-in-law, as well as numerous nephews and nieces. He was predeceased by his parents Ernie and Edna (Penny) Gallant, brothers David and Ron. Born in Virden, MB and raised in La Riviere, MB with stopovers in Manitou, MB and Pilot Mound, MB, settling in Selkirk, MB where he was a barber. Following this he began his career with Manitoba Hydro. Maurice was actively involved in all residing communities. He took great pride in many roles within the Royal Canadian Legion Branch #42. Maurice and Darlene returned to La Riviere to enjoy their retirement years. As Dad's health declined he fought with quiet courage and a tremendous will to live. In keeping with Maurice's wishes cremation has taken place and a memorial service will be held at a later date. In lieu of flowers, donations to CancerCare Manitoba and or the Lorne Memorial Hospital, Swan Lake, MB would be appreciated. From his loving wife I have lost my partner, my friend, my helping hand. You always said to me "I am here for you", you were. Till the morning of the day when you had to end your journey here with me and be the star above. I will cherish the many memories that we have had together. Wheatland Funeral Services Pilot Mound, MB - 204-825-2848