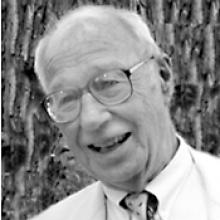 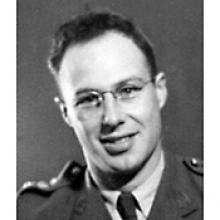 FRANCIS (FRANK) JOHN ESSLEMONT PURDIE B.Sc., M.D., F.R.C.S.C. Francis (Frank) John Esslemont Purdie died peacefully at Brandon, MB, December 26, 2013. Born May 26, 1920 at Griswold, MB, Frank was the son of Frank Kidd Purdie and Jean Ann Esslemont. Frank was predeceased by his wife of 57 years, Gwyneth (Jonesy) Helen Campbell Purdie (nee Jones), his brother, Jack Edmison Purdie, and sister-in-law Margaret Purdie. He is survived by his children: Dr. Frank Roy Jones Purdie (Joanne), Jane Anne Gwyneth Purdie Q.C. (James Spears), and Betty Purdie Talley (Hersh), his grandchildren: Amy Purdie (Richard White), Blair Talley (Amanda), Gwyneth Talley, and step-grandchildren Craig Casner, Nicholas and Matthew Spears; his great-grandchildren: Annaleis and Liam Talley; his niece, Ann Farguson and family, his sisters-in-law Anne Hume and family, and Anne Jones and family, and the nieces and nephews on the Jones side of the family; his close friends Dr. Bob Myers and Joan, his good neighbours Morley and Ruth McKay and his much-appreciated friend Jessie McPherson. Frank Purdie grew up in Griswold, MB, the son of a country doctor and nurse, who enjoyed the respect of generations of patients and community members. In Griswold's three-room schoolhouse he attained Grade 11 by the age of 15, and during 1935 / 1936 he took Grade 12 at Brandon Collegiate Institute while living with his Esslemont grandparents. He continued studies at the University of Manitoba, graduating with a B.Sc. in 1939 and M.D. in 1944. As a medical officer during the Second World War he was at Camp Borden, ON when he met his wife, Lt. Gwyneth (Jonesy) Jones, an army nursing sister from Toronto. They married in September 1945 and upon his discharge as a Major, they lived in Winnipeg while he took part of an orthopedic residency. In 1947, they moved to Brandon where Frank practised with Doctors Evans, Matheson, Hirsch and Duggan. In 1962, Doctors Purdie, Evans, Matheson, Hirsch, Findlay, Myers and Elliott founded the Brandon Clinic. The Brandon Clinic has operated for more than 50 years carrying on a tradition of full-service medicine. Frank did post-graduate studies and qualified as a general surgeon in 1964, practising at the Brandon Clinic until he formally retired in 1979 and took three locum positions in New Zealand before travelling home via Australia, South Africa and Scotland. With Jonesy, he travelled to every continent including Antarctica. A six-month round the world backpacking trip in 1983 / 1984 was their longest. Between trips, Frank worked as a G.P. and general surgeon at the Brandon Clinic, consulting surgeon for Souris, administrator of a rural hospital in Eastern Manitoba and assisted at operations at the Brandon General Hospital until 2003. Frank served his patients, the medical profession, and his community - following his father's footsteps, he became President of the College of Physicians and Surgeons of Manitoba 1967 / 1968 and after many years of service on several committees and chairing many discipline inquiries, received the highest honour of a life membership in the College. He was an army medical officer of the 26th Field Regiment from 1948 to 1963. He was President of the Brandon and District Medical Association, President of the Brandon General Hospital Medical Staff and Chief of the Surgical Section. He established funds for charitable purposes - the Gwyneth Purdie Memorial Literacy Fund, YMCA endowment for children and Gwyneth and Frank Purdie Family Fund at the Brandon and Area Foundation, and continued support for the Dr. and Mrs. F. K. Purdie and Family scholarship for the School of Nursing at Brandon University. He was active in the Kinsmen Club as a District Governor and life member; he was involved in the Brandon Golf and Country Club and both the Brandon and Wheat City curling clubs; he volunteered at the World Junior Softball tournaments, the Canada Summer and Winter Games, and the Briers. Frank believed in active sports - skating on ponds and sloughs until Griswold opened its indoor rink in 1929, curling with his parents and his brother Jack - winning the Griswold Bonspiel including when he was 13 - and later at 83 and winning an event at the Winnipeg Bonspiel. He was in demand to pitch or catch baseball including many years for the Brandon senior men's team. He played basketball at University of Manitoba for science and medicine and the Junior varsity; he earned medals for shotput, discus, and hammer throw. He golfed recreationally until he was 92, playing two 18-hole games one day after the other. In the 1960s when Frank and Jonesy built a cottage on Pelican Lake, the whole family started sailing and water-skiing; they also enjoyed downhill and cross-country skiing in the winter with family, friends and relatives, at Glenorky, their "condo" at McCreary and ski resorts. Frank and Jonesy loved to party. On their 50th wedding anniversary, having hired a big band, they out-danced and out-lasted their children and younger friends. Frank teased both spouse and neighbours with the full sized pink flamingos on his front lawn, decorated as Easter bunnies or Christmas reindeer. Other visual props appeared at the Purdie household and at Pelican Lake, often with the purpose of welcoming visitors. In 2006 he wrote some of the events of his full life, and summarized: "My life has been filled with all the joy and satisfaction I could ever want: Gwyneth, my children and medicine plus my many friends. It is as though I have lived in Utopia". Cremation has occurred. A Memorial Service will be held at St. Matthews Cathedral, 403-13th Street, Brandon, MB at 1:00 p.m. on Saturday, February 15, 2014. Donations to the Purdie funds at the Brandon and Area Community Foundation, DPO Box 22096, Brandon, MB R7A 6Y9 or Brandon University Foundation, 270-18th St., Brandon, MB R7A 6A9 or to children's sports organizations would be appreciated. Expressions of sympathy may be made at www.memorieschapel.com Arrangements with Memories Chapel & Pre-Planning Centre, Brandon 1-888-694-8153.