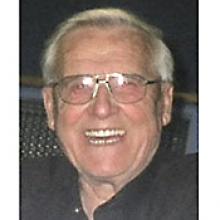 JOHAN (JOHN) M. WIENS 1922 - 2014 Peacefully on Monday, January 6, 2014, at Boundary Trails Health Center, John M. Wiens, aged 91 years of Morden, MB, went to be with his heavenly Father. Johan Wiens, commonly known as John "M" to distinguish himself from his namesake father, was born May 19, 1922, in the Russian village of Nova Prokrowska, Siberia, to John J. and Helena Wiens. Due to the revolutionary upheaval, his mother and father made the decision to immigrate and, in 1927, the family took up residence in Morden, MB. Except for a few years during the Second World War, John lived, worked and participated in public life in Morden. On November 28, 1943, he married Martha Born. It was a marriage that was filled with love, hard work and the importance of extended family and church. They had four children born to them and he loved them all. Our father was blessed with a strong physical body and one of his great joys was to see the results of the hard work he had put into any business project. This good health was with him until 2004 when he suffered his first stroke. There was recovery and things were well until January of 2006 when, after 62 years of marriage, his love Martha died; a void that never left him. He was in relatively good health until February 2013 when he suffered a second stroke and was diagnosed with cancer. With compassionate care and the assistance of his physician, Dr. Kevin Convery, Boundary Trails Health Centre staff, Mary Benson and her wonderful Home Care staff and the Morden Handi-van, he was able to return home. With the pampered attention of the staff at the assisted living facility, Homestead South in Morden, he had a good quality of life until two weeks before his passing. The family is grateful for their efforts. Dad was predeceased by his parents, John and Helena; his wife Martha; and one brother Henry; three brothers-in-law; and one sister-in-law. He is survived by four children, sons Robert (Marlene) of Calgary, AB, David (Ruth) of Kelowna, BC and John (Sharron) of Morden, daughter Linda (Randy) Earl of Strathclair; as well as nine grandchildren; thirteen great- grandchildren; one brother; five sisters; and numerous other relatives. There will be no public viewing. A funeral service will be held at 2:00 p.m. on Friday, January 10, 2014, at Westside Community Church, 831 Thornhill St., Morden, with a family interment at Southside Cemetery. In lieu of flowers, donations may be made in John's memory to the Tabor Home Restricted Fund, available at the church. Dad desired to finish life with his belief in Jesus strong and intact; to see his heavenly Father and to be with Martha. We, as a family, are at ease in the assurance that all of the above have come to pass. Wiebe Funeral Chapel, Morden in care of arrangements, 204-822-4755 wiebefuneralhomes.com