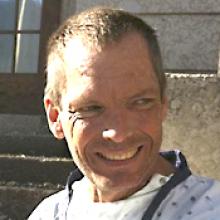 JAMES THOMAS O'BRIEN 1967 - 2013 It is with great sadness the family announces the passing of James O'Brien on Monday, December 30, 2013 at the St. Boniface Hospital at the age of 46, after a battle with kidney failure. James was predeceased by his grandparents; Alexandra and Daniel Ellefson, and Edna and Thomas O'Brien; uncles, John O'Brien and Ben Lajoie, and great-uncle Lawrence Petersen. Left to cherish his memory are; his parents, Joyce and James Sr. and sister, Kathleen; aunts, Ruth Hinze, Barb Lajoie, Joan (Bill) Tataryn, Linda (Denis) Viallet, Aleth (John) Mansley, Lynne White, Barb Smith, Sandra Holm, Judy Ellefson, as well as by numerous nieces, nephews, relatives and friends. James was born in Winnipeg on August 22, 1967 and from his first steps he loved the outdoors and every creature in it. He loved both downhill and cross country skiing, swimming, hiking, jumping, running, snowshoeing, martial arts and cycling. Cycling was his true passion from his first race as a pee wee, which he won. He competed all over Canada and the United States. James was on the Manitoba Provincial Team until his kidneys failed, even after his diagnosis he continued to ride and train right up until his passing. He was a licensed coach and cycling commissaire, enjoyed helping young riders develop and loved to watch them compete. The family would like to extend a heartfelt thank you to the doctors, nurses and staff who cared for James over the years, and to the paramedics and first responders who tried so hard to keep James with us. Cremation has taken place and a memorial service celebrating James' life will be held on Saturday, January 11, 2014 at 11:00 a.m. in the Coutu Funeral Chapel, 680 Archibald Street. In lieu of flowers, if friends so desire, donations in memory of James may be made to Kidney Foundation of Canada, Manitoba Branch, Unit 1-452 Dovercourt Drive, Winnipeg, MB. R3Y 1G4. The Coutu family in care of arrangements: E.J. COUTU & CO. FUNERAL DIRECTORS 680 Archibald Street 204-253-5086 ejcoutu.com