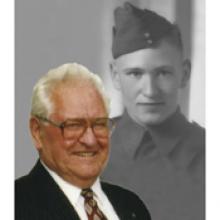 RICHARD (DICK) FLEMING WRIGHT 1924 - 2014 Richard "Dick" Fleming Wright of Brandon, beloved father of Larry (Pat), Rick (Joan) and Joanne Wright, passed away peacefully on Sunday, January 5, 2014 at Brandon Regional Health Centre at the age of 89 years. Born on August 3, 1924 near Winnipegosis, Manitoba, Dick was the youngest of five children born to James and Minnie Wright. Dick spent his youth fishing, trapping, hunting and helping his father at the family-owned sawmill until he became restless and joined the army in 1941. He saw action in several European countries from 1941 to 1945, including Italy and Germany. In 1954 and 1955, he saw action in the Korean conflict. Dick was a life-long avid member of the Royal Canadian Legion, ANAVETS and the United Nations Peacekeepers. Dad married Emma in 1947, and following his military service moved the family to Churchill, Manitoba in 1957. There he worked as a cook at the Fort Prince of Wales rebuild project and then as a firefighter at the Fort Churchill military base, eventually becoming Fire Chief. Dick was in his glory in the northern wilderness and never missed an opportunity to fish and hunt. In 1968, Dick moved the family south and was fire chief in The Pas and then an Assistant Fire Commissioner in Thompson, and finally with the Fire Commissioner's Office at the Fire College in Brandon. He remained at this post until he retired in 1994. In his job, he travelled a lot to northern communities and he would always have his fishing gear with him, ready to try out a new fishing hole. Fishing and gardening remained his passions and kept him busy long after he retired. Dick and his lovely wife, Emma, and their three children Larry, Rick and Joanne, enjoyed frequent family get-togethers and outings, where good times were had by grandparents, sons and daughter and grandchildren. Dick is survived by sons Larry (Pat), Rick (Joan), daughter Joanne, grandchildren Craig, Tracey, Jeff and Adam and great-grandchildren Kaitlyn, Jenna, Griffin and Aubrey. Dick was predeceased by Emma, his wife of 63 years, brothers Jim and Bill, sisters Margaret and Frances and grandson Kelly. He will always be remembered as a family man, generous in spirit and friendship. May there always be a fishing pole waiting for you, Dad. A Service of Remembrance to honour Dick's life will be held at the Brockie Donovan Chapel, 332 - 8th Street, on Monday, January 13, 2014 at 1:00 p.m. In lieu of flowers, donations in memory of Dick may be made to the Canadian Diabetes Association, Unit A1-800 Rosser Ave., Brandon, MB, R7A 6N5. Messages of condolence may be placed at www.brockiedonovan.com. Arrangements are in care of Brockie Donovan Funeral and Cremation Services, Brandon, MB, (204) 727-0694.