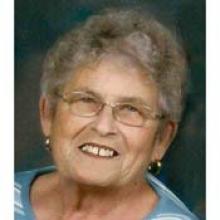 MARGARET KATHLEEN MOZDZEN (nee MACK) With love and sadness, we say goodbye to our beloved wife, mother, grandmother, sister, aunt, and friend who passed away peacefully at the age of 75, on January 11, 2014 at Health Sciences Centre. Her memory will live on in the hearts of her husband of 51 years, Mike; sons Daren (Heather), Kevin (Robbie), and Trevas (Charlene); six cherished grandchildren Kevin, Kristen, Keith, Dylan, Drew, and Dustin; sisters Elaine (Ed), Marilyn, Caryn (John), and Norma (Doug); including numerous nieces, nephews, and extended family. She was predeceased by her father Tom, mother Helen, and brother-in-law Leonard. In her younger years, Margaret worked as a school teacher in the Birdina District and bank teller with the Royal Bank of Canada in Langruth. After raising a family and upon her father's retirement from Canada Post, Margaret went back to work as Postmaster at the Alonsa Post Office until her retirement in April 2000. Margaret loved her childhood growing up in Alonsa and would often recount stories of one room school houses, hectic times that came with farming and harvest season, family holiday gatherings, gardening, and the challenges of raising a family. She was actively involved and volunteered in the community over the years. After retirement, Margaret enjoyed spending summers camping and fishing at Lake Manitoba Narrows with family and friends. Aileen, Marilyn, and she perfected the routine of preparing Saturday supper for the men allowing them just enough time to clean up and make it for the calling of the first number at BINGO in the neighbouring community. This was usually followed by a bonfire and fish fry upon returning with their winnings. Margaret will be fondly remembered for her smile, compassion, understanding, generosity and commitment to her family. The family would like to express their sincere gratitude to all the doctors, nurses, and caregivers that helped care for Margaret over the last couple of years, which in turn allowed her to remain living comfortably at home. Cremation has taken place and a memorial service will be held on Saturday, January 18 at 1:00 p.m. in the Alonsa Community Hall. A private interment will take place at a later date. In lieu of flowers, donations can be made to the Kidney Foundation or Greys Ridge Cemetery, General Delivery, Alonsa, Manitoba R0H 0A0. Dobchuk Funeral Home entrusted with arrangements. 1-204-835-2004.