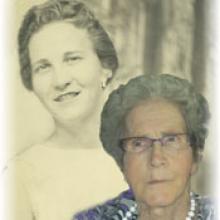 KAY GROSJEAN Surrounded by her beloved family, Kay passed away peacefully at her home, Dinsdale Personal Care Centre in Brandon, on January 9, 2014 at the age of 75. She is survived by her daughter, Connie Shorrock (Darcy), son, Adam Grosjean (Cheri) and four grandchildren, Chad (Danielle), and Brett (Amanda) Shorrock, Mark and Heidi Grosjean, as well as two great-grandchildren, Thomas and Penelope. Kay was born April 24, 1938 in Rorketon, MB. She was the second youngest of seven daughters born to Thomas and Mary Chambers. As a child, Kay attended Abbott's Hall School and lived in several rural farming communities. As a young woman, she worked as a nurse's aide at the Ninette Sanatorium, Souris General Hospital and Brandon's Valleyview Personal Care Home. She was an exceptional nurse's aide and cherished her years as a compassionate caregiver. In 1959, Kay married Jack Grosjean, and together they raised three children, Craig, Connie and Adam. Tragically, Craig predeceased Kay in 1970. In 1973, Kay was diagnosed with Multiple Sclerosis. Despite the steady progression of this degenerative disease, Kay lived her life to its fullest and she lived independently for as long as she was able. Thereafter, Kay became a well-loved resident and friend at Dinsdale Personal Care Home where she remained for 15 years. Kay was fiercely proud of her children and grandchildren and of her nursing aide designation. Both her family and her working years were an endless source of joy and pride. The highlights of her year were always the holiday visits hosted by her son-in-law's parents, Donna and Don Shorrock. She was a woman of strong Faith. She was a woman of enormous optimism and even when circumstances were grave, she was still "pretty good". Her surviving family wish to thank Dr. Joanne Maier, the entire Dinsdale Staff and Kay's very special big sister, Betty Bage, for their commitment to enriching Kay's life. The service to honour Kay will be held at the Brockie Donovan Chapel, 332-8th Street, Brandon, on Tuesday, January 14, 2014 at 11:00 a.m. Interment will follow at the Souris / Glenwood Cemetery. Flowers are gratefully declined. If friends and family wish, donations may be made in Kay's memory to Dinsdale Personal Care Home, 510-6th Street, Brandon, MB R7A 3N9, phone (204) 727-3636. Messages of condolence may be placed at www.brockiedonovan.com Arrangements are in care of Brockie Donovan Funeral & Cremation Services Brandon, MB, (204) 727-0694