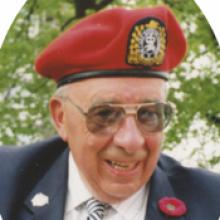 GERMUND ALFRED ANDERSON It is with great sorrow that we announce the sudden passing of Germund Alfred Anderson, beloved husband of Shirley, father of Jeff and Bruce, father-in-law of Debbie and Adelle, grandfather of Lorena and Sophia, and Brendan and Shaeleigh. He is survived by his twin sister Gertrude Dimmery - who was born two hours ahead of him! His younger sister Ester Jackson died in 1974 in a winter storm accident. Germund's father Nils was born in Sweden and immigrated to the U.S.A. when he was a fairly young man. He met Hilma, a young seamstress in Minneapolis, and even with the language barrier, they seemed to get along well and in 1921 they married. A few years later, when Germund and Gertrude were about two, the family decided to move to Canada and ended up living on a farm near McCreary, MB. Times were tough and Nils decided to go back to carpentry work - and Germund started helping his Dad and learned the trade from the ground up. The war was on and Germund decided that he was going to join up, and in the winter of 1943 he did. He took basic training in Canada and then was sent overseas and spent the next three years in Holland, Belgium and Germany. He was in the Lake Superior Regiment, and in later years was very proud to wear the red beret at Legion affairs. Germund joined his father in carpentry work and eventually met Shirley. They married in l962 and had two boys - Jeffrey and Bruce. A few years later the family moved to Neepawa and Germund started up his own company - G.A. Anderson Neepawa Ltd. - and carried on his own business until retirement. During that time he decided to try writing exams to obtain his Carpentry Journeyman Papers and was successful in doing that. We all felt his father must have been a good teacher! Germund had many other interests in life - He was Past-master of the McCreary Masonic Lodge, was an active member of the Neepawa Legion and Charter Member of the Neepawa Flying Club. He served on the boards of Touchwood Park, Osborne Home and the Neepawa United Church. He was always interested in the boys activities - Jeff's hockey games, Bruce's swimming, and Air Cadets, for both of them, to name a few. He also enjoyed his daily game of golf. Germund and Shirley have enjoyed a long retirement, and have made many trips to visit their boys and grandchildren in Cochrane, AB, and Saskatoon, SK. They travelled to Holland in 1995 and 2000 to go for the 45th and 50th reunion of the end of the war, and also to meet up with a Dutch lady who had been a young girl wanting to write to a young girl in Canada. Germund had given his sister Ester's name and address and they had corresponded until Ester's death, and then Shirley took over. It was a wonderful reunion time for Nettie and Germund and the trips were both a very happy time. Trips were made to Sweden to visit Germund's Swedish relatives, and to Scotland to visit Shirley's. They also made many other trips with friends during their retirement. Life changed quite a bit as health problems seemed to creep up. Germund had resided in Country Meadows for the last two years and Shirley kept busy visiting him. His death occurred on January 19, 2014 and a lovely service was held in Neepawa United Church on January 23, 2014 with Kristen Wood officiating, interment took place in the Riverside Cemetery, Neepawa, MB. The family would like to thank the staff on C Wing at Country Meadows very much for the wonderful care Germund received while there. We also thank Dr. Ong for the many years of care that he has given Germund. White's Funeral Home - Neepawa in care of arrangements.
Publish Date: Feb 1, 2014