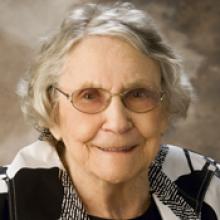 CECILE ELIZE USUNIER Cecile Elize Usunier, beloved wife of the late André Usunier, passed away peacefully at her residence, Fairview Home, Brandon, on Tuesday, January 21, 2014 at the age of 90 years. Prayers will be held at the Brockie Donovan Chapel, 332-8th Street, Brandon, on Friday, January 24, 2014 at 7:00 p.m. Mass of Christian Burial will be held at St. Augustine's Roman Catholic Church, 327-4th Street, Brandon, on Saturday, January 25, 2014 at 10:30 a.m. with Fr. John Okosun as Celebrant. Interment will follow at the Brandon Cemetery. In lieu of flowers, donations in memory of Cecile may be made to the Fairview Fund, 1351-13th Street, Brandon, MB R7A 4S6. Complete obituary information to follow. Messages of condolence may be placed at www.brockiedonovan.com Arrangements are in care of Brockie Donovan Funeral & Cremation Services, Brandon, (204) 727-0694.
Publish Date: Jan 22, 2014