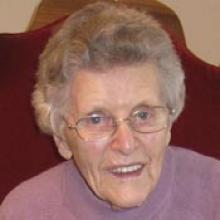 HERTHA ELSIE HEMMINGER (nee LINK) 1922 - 2014 On Saturday, January 18, 2014 at Boundary Trails Health Centre after a short illness, Hertha Hemminger, aged 91 years of Morden, MB went to her eternal rest. Hertha was born on March 18, 1922 in a log cabin on the family farm in the Brown district also known as 1-6, twelve miles southwest of Morden to Karl and Natalie Link. Hertha spent many years enjoying life on the farm. Her flower garden was her pride and joy. Summers on the farm were spent raising chickens, turkeys, ducks and geese. After retiring to Morden from the farm, she enjoyed working at the Morden hospital. She also cared for her husband following his stroke and continued to offer encouragement to others. She leaves to mourn her three daughters; Doris (John) Blakeston of Sanford, Joyce (special friend, Ed McGowan) of Calgary, AB, Alice (Dave) Ellie of Winnipeg, four grandchildren, Jeff (Tammy), Jay (Connie), Devin (Mara), Nicole, five great-grandchildren, Max and Zack, Rachel and Rebecca, Ethan, four sisters, Edna Swayze, Esther (Andy) Giesbrecht, Alice (Jim) Grierson, Grace Brooks and one brother, Arthur Link. She was predeceased by her husband, John Hemminger (1992), her father, Karl (1938), her mother, Natalia (1987), two sisters in infancy, Lydia and Erna, two sisters, Emma Walkof (2006), Ruth Gall (1990) and two brothers, Gus Link (1981) and Harold Link (1987). Funeral service will be held on Saturday, January 25, 2014 at 2:00 p.m. at the Zion Lutheran Church, Morden with Pastor Alex Klages officiating. Interment will take place following the service at the Hillside Cemetery. The family wishes to thank all the staff at the Boundary Trails Health Centre for the excellent care Hertha received during her stay and the homecare caregivers that made it possible for Hertha to remain in her home. If friends so desire donations may be made in Hertha's memory to the Zion Lutheran Church, 144-7th Street, Morden, MB R6M 1E2 or the Heart and Stroke Foundation, 6 Donald St. Suite 200, Winnipeg, MB R3L 0K6. Wiebe Funeral Chapel, Morden in care of arrangements, 204-822-4755 wiebefuneralhomes.com