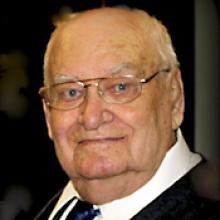 HENRY J. WIEBE 1922 - 2014 On Tuesday, January 21, 2014 at Salem Home in Winkler, MB, Henry J. Wiebe at the age of 91 years formerly of Plum Coulee went to his eternal rest. He leaves to mourn his passing three sons, Don and Barb Wiebe of Altona, Frank and Viola Wiebe of Winkler, Ted and Angela Wiebe of Carman, six grandchildren and 12 great-grandchildren, brother, Dave and Lena Wiebe, sisters-in-law, Agatha Wiebe and Katherine Wiebe, and brother-in-law, Walter Penner. He was predeceased by his wife, Anne in 2011 and one son, Harold in infancy. Viewing will be from 1:00 p.m. until 7:00 p.m. on Friday at Wiebe Funeral Home, 121 8th St. in Winkler only. Memorial service will be held at 11:00 a.m. on Saturday, January 25, 2014 at the Emmanuel Mennonite Church, 750 15th St. in Winkler with interment prior to the service at 10:00 a.m., at the Plum Coulee Cemetery. In lieu of flowers, donations may be made in Henry's memory to the Canadian Food Grains Bank or the Dr. C. W. Wiebe Fund, c/o the Winkler Community Foundation, available at the church. Wiebe Funeral Home, Winkler In care of arrangements, 204-325-4201 wiebefuneralhomes.com