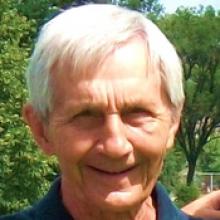 EDWARD JAMES PALAMAR Ed died peacefully at the Concordia Hospital in Winnipeg on January 19, 2014. He was devoted to his wife of 55 years, Lorraine and was extremely proud of his three sons, David, Mark (Michelle) and Garth (Lissa) and six grandsons, Adam, Eric, Colin, Matt, Kyle and Nick. He will be sorely missed by all of them as well as numerous other family members and friends. He was born in 1932 to immigrant parents in Winnipeg's North End. A natural athlete, he learned to play hockey on the outdoor rink in the school yard near his home. At age 16, at the urging of friends, he played his first year of organized hockey in Winnipeg's adult commercial hockey league. His ability to inflict punishing body checks on opposition forwards soon caught the eye of the local scout for the Detroit Red Wings and the next year he joined the Wings' junior affiliate, the Windsor Spitfires of the OHL. He finished his junior year as the Captain of the Spitfires and then turned professional playing for a number of different teams in eastern Canada and the United States. The impending birth of his first son necessitated looking for a steady job closer to home so Ed decided to join the Winnipeg Fire Department. He spent 36 years as a firefighter retiring in 1996 as a District Chief. For the first few years of his firefighting career he continued to play hockey part time in the Manitoba Senior League as playing coach for the Warroad Lakers. Ed spent a number of years of his firefighting career on the Rescue Unit of Fire Hall Number One. On the Rescue Unit, he was exposed to more than his fair share of tragedy but there were also many gratifying moments including helping in the delivery of a baby girl at her home. A private service will be held at a later date. Flowers gratefully declined. Donations may be made to a charity of your choice. Thanks to Dr. Czaykowski at CancerCare, Dr. St. Godard, Palliative Care and the staff of Concordia Hospital for their care and kindness.