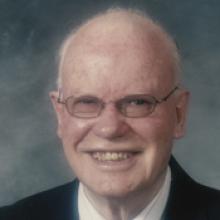 WILLIAM (BILL) COMPTON January 11, 1920 - January 21, 2014 Peacefully, surrounded by the love of his family, Bill Compton passed away on January 21 at his home in Vista Park Lodge. He was predeceased by his wife Marjorie, his parents Joe and Pearl, his sister Lorna Cassels and his brother Edgar. Left to mourn his passing are his family Allan (Lorraine) Compton and children Tammy (Grant), Darryl (Dawn) and Ryan (Carrie); Bev (Blane) Ward and children Chris (Annie), Nicole and Kathy (Dave); Dianne (Bruce) Urquhart and children Ian (Stephanie) and Alanna (Chris) as well as twelve great-grandchildren. Also left to mourn are his sisters-in-law and brothers-in-law Lillian Raffey, Edith Pearce, Frank and Beryl Wilson and Mel Cassels. Bill enjoyed a variety of careers which included growing up on the family farm at Darlingford, serving in the Royal Canadian Air Force during the Second World War and returning to operate and own the family farm in 1945. In 1955, the Compton family moved to Winnipeg where Dad held a variety of jobs until he got involved in the heating business working primarily servicing commercial buildings, although he remained a farmer at heart. His hobbies included camping, golfing and curling. Bill's good friend, Frank Wilson, introduced him to his sister Marj and in 1942 Bill and Marj were married and from that time on Bill's family was his number one priority. He had many good one liners but a favourite was, "once a father, always a father" which also grew to include grandpa and great-grandpa. He loved family gatherings, which often included Hand and Foot Canasta, and he would never miss an event until his health limited him in the last few years. However, he still attended if Handi Transit was available. Bill was always there to help family and friends. He liked to drive the grandkids and attend their special events. He was also actively involved at Regents Park United Church (now St. Mary's Road United Church) from 1955 until recently. Memories of Bill's smile, generous nature and calm demeanor are gifts the family will cherish forever. A memorial Service will be held Thursday, February 13 at 1:00 p.m. at St. Mary's Road United Church, 613 St.Mary's Rd. In lieu of flowers, please make a donation to Parkinsons Society Manitoba, Ste. 7-414 Westmount Dr., Winnipeg, R2J 1P2 or St. Mary's Rd. United Church, 613 St. Mary's Rd., Winnipeg, R2M 3L8. www.seasonsfunerals.ca
Publish Date: Feb 8, 2014

WILLIAM (BILL) COMPTON Peacefully on Tuesday, January 21, 2014, Bill passed away at Vista Park Lodge at the age of 94 years. Bill will be sadly missed by his children, Allan Compton, Bev Ward, and Dianne Urquhart and their families. A complete obituary will follow in the Saturday, February 8 edition. www.seasonsfunerals.ca
Publish Date: Jan 25, 2014