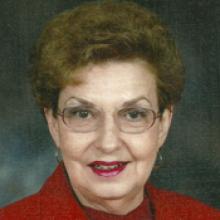 ELSIE HOPFNER It is with heavy hearts and great sadness that we announce the passing of our Mom, Elsie Hopfner. She passed away peacefully on January 27, 2014 at Ste. Rose General Hospital. She was predeceased by her husband, our Dad, in April, 2001. She is survived by her children Carol Wish (Mark), Kerry Hopfner, Lee Hopfner, Lynn Stomp (Eric), Kevin Hopfner (Nicola), Lori Hopfner (Mario), her grandchildren Ryan, Ian (Alanna) Brandy (Derek), Kylie (Jen) Vanessa (Ivan ), Michael, Alexander, Kyle, Sydney, 15 great-grandchildren, two nieces and her sister Verna (Pat, deceased) and brother Barry (Eliane). Mom is also survived by her longtime companion Adelard Ingelbeen and his family, Gerald (Michelle), Alain (Debbie) and their extended family. She was born on February 13, 1932 in Rorketon, Manitoba, the eldest child of Walter and Katherine Talpash. She spent her early childhood in Winnipegosis, moving to Ste. Rose when she was nine years old. After graduating from high school, she moved to Winnipeg with three close friends to work at the Eaton's mail order office. Mom met Dad prior to moving to Winnipeg and after a couple years of courting, they decided to marry and move to the Methley area to farm. It was there that they started their family with Carol, Kerry, Lee and Lynn, being born in succession. The family moved to Ste. Rose in 1958 where Kevin and Lori were born. The family was now complete. She started her sales career with Avon in 1960 and it continued until just recently. During that time, she pursued other positions including substitute teaching and working at her family's store. Mom was a very talented and social person who enjoyed everything from curling, singing, dancing and painting to travelling. A big part of her earlier years included being an extraordinary soloist at many weddings and on the radio, and her love for singing continued throughout her life as demonstrated by her dedication to the church choir. She was an avid reader who loved to spend her spare time with a good book. Another big part of Mom's life was her time spent outdoors. Her gardens were like no other. She also loved her time at the lake and every summer included time spent at Methley or Manipogo with family and close friends. This provided her family with many wonderful memories and helped establish their love for lake life. Retirement was never an option for Mom. Her love for the social aspect of her career and the challenges that it presented kept her going strong for many years. Every time she said she was going to retire, she came up with an excuse as to why she shouldn't. She will always be remembered as an inspiring example of hard work, dedication, determination and independence. Funeral mass for Elsie will be celebrated on Saturday, February 1, 2014 at 2:00 p.m. in the Ste. Rose de Lima Roman Catholic Church in Ste. Rose du Lac. Fr. Renerio Dayanan will celebrate the mass with the service concluding at the church. Interment will take place at a later date in the Ste. Rose Cemetery. Flowers are gratefully declined. Please consider making a donation in memory of Elsie to Palliative Care at the Ste. Rose General Hospital or to CancerCare Manitoba. We know that Mom would like to thank to Dr. Marshall Pitz at CancerCare Manitoba, Dr. Gudmundson, and the Ste. Rose Hospital staff, Dauphin General Hospital Chemo Unit nurses and doctors and her home care case coordinator. Sneath-Strilchuk Funeral Services, Ste. Rose Chapel in care of arrangements, 204-447-2444, www.sneathstrilchuk.com