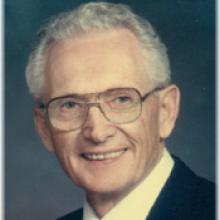 ARTHUR EDMUND (BERT) HALL On Saturday, February 1, 2014 at the Pembina Manitou Personal Care Home, Arthur Edmund "Bert" Hall, aged 94 years, passed away peacefully with his family at his side. Bert is survived by his wife, Beth (McLean) Hall, his children Derryl (Linda) of Stonewall, MB, Walter (Gloria) of Cremona, AB and Ray (Cathy) of Gladstone, MB. He is also survived by Beth's children, Rod (Gloria) of Sudbury, ON, Hugh (Mary) of Winnipeg, Carol (David McIntosh) of Manitou, MB, Robert (Marina) of Kaleida, MB, Sheila (Bruce Wallcraft) of LaRiviere, MB, as well as 17 grandchildren and 15 great-grandchildren. Also surviving him are his sister Doris Sims of Cranbrook, BC, brother Don Hall of Ottawa, ON, and other members of his extended family. Bert was predeceased by his first wife Clara, his parents, his older brother and one grandchild. Bert was born on January 20, 1920 on the family farm in the district of New Haven northeast of Manitou. He attended the New Haven School to Grade 8, then took Grades 9 and 10 by correspondence. While still a teenager, he and his older brother, Ken, established the first registered turkey hatchery in Manitoba under the name "Hall Brothers". This turkey operation was interrupted by the Second World War when Bert enlisted in the R.C.A.F. and trained as an aircraft mechanic. In 1942 Bert married the local school teacher, Clara Sampson. Following the war, he and Clara purchased the Hall family farm in New Haven where they continued to farm until 1956. They had three children, Derryl, Walter and Ray. In 1956 the family moved to the town of Manitou where Bert assumed the position of shareholder, director, and general manager of Manitou Broiler Farms, a position he held until his retirement in 1985. During his 30 years with Manitou Broiler Farms Bert became involved in agricultural policy at the provincial and federal levels. He held executive positions on numerous farm organizations including the Manitoba Chicken Broiler Producers Marketing Board, Manitoba Farm Bureau, Canadian Federation of Agriculture, and the Canadian Chicken Marketing Agency. He is also considered to be one of the founding members of KAP (Keystone Agricultural Producers). In the 1980s and 1990s he was appointed a member of the Manitoba Natural Products Marketing Council. Bert was also very active in the local community. He served on various boards including the school division, United Church and health care; also various building committees such as United Church Christian Education Building, Elementary School, Manitou Arena, Pembina Manitou Health Centre and the 55+ Senior Complex. He was also mayor of Manitou for two terms from 1986 to 1992. Somehow he made time in his busy schedule to coach his sons' sports teams. Over the years, Bert received numerous recognitions including two Queen's anniversary medals (25th and 50th), University of Manitoba Distinguished Service Award, Manitoba Volunteer Award, a commemorative medal celebrating the 125th anniversary of Confederation. In 1999 he was inducted into the Manitoba Agricultural Hall of Fame. After 44 happy years together, his wife, Clara passed away in 1986; a very difficult time in Dad's life. He later married Beth McLean and in August 2013 they celebrated their 25th wedding anniversary together. During his retirement years, Dad developed a passion for golfing, curling and traveling. In spite of his very busy life, Dad's first priority was always his family. He was happiest when family visited or gathered for special events. His compassion, his optimism, his unfailing support will always be remembered and will continue to serve as an example for all of us. We will miss him dearly. A memorial service is planned for Monday, February 10 at 2:00 p.m. in St. Andrews United Church, 338 Hamilton St., Manitou. Honorary pallbearers will be grandsons Chris Hall, Andy Hall, Blaine Hall, Bradley McLean, Jordan McLean, Don McLean and Scott Wallcraft. A private family interment will take place at a later date. In lieu of flowers, donations can be made to St. Andrews United Church or to a charity of your choice. The family would like to thank the Manitou Home Care workers, Dr. Woelk and the staff of Boundary Trails Hospital and the staff of the Pembina Manitou Personal Care Home for their special care and compassion shown to Dad. Messages of condolences may be made online at: www.wheatlandfs.com Wheatland Funeral Service 204-825-2848 - www.wheatlandfs.com