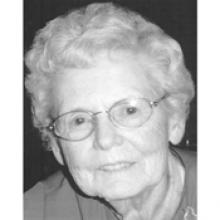 AGANETHA (AGNES) POETTCKER (nee BAERGEN) Peacefully, on February 7, 2014, in the presence of family, Agnes went to meet her Lord. She is survived by Henry, her husband of 67 years, brothers Neil and Jake, sister-in-law Katie, daughter Chrystyanna, sons Ron and Martin, seven grandchildren and 17 great-grandchildren. Agnes was born in Sedalia, Alberta on February 19, 1926, to parents Gerhard and Aganetha Baergen. One of Gerhard's 19 children, she put her education on hold in Grade 9 so that she could work on the farm while her brothers were away during the war. She then worked as a housekeeper in Edmonton and as a waitress in Strome, Alberta. Throughout the winters Agnes attended Bible School at the local Mennonite Church in Didsbury where she met Henry. They were married July 4, 1946 in Tofield, Alberta. Agnes worked as a homemaker in Winnipeg until the children were grown, after which she was employed at Stretch & Sew (later Contempo Fabrics). Upon attaining her BA, she worked in the U of M Extension Library until she and Henry moved to Elkhart in 1978. While in Elkhart, Agnes obtained a Masters of Library Science from Indiana University, and then worked at both the Mishawaka Public Library and the Mennonite Biblical Seminary Historical Library. Agnes and Henry moved back to Winnipeg in 1990, where she spent much of her time volunteering at Bethel Mennonite Church and CMBC. After a stroke in 2004, Agnes was unable to continue her philanthropy, but her love of reading endured. Agnes' patience and intelligence were always evident, and she will be remembered as a compassionate woman and friend to many. Her grandchildren especially cherish the stories that Oma recorded on cassette tape, as well as the time that they spent with her sewing, baking, and cooking. She will be sadly missed. The family would like to thank the compassionate staff at Pembina Place Personal Care Home for making Agnes' last days most comfortable. We would also like to thank the Home care staff who helped Henry care for Agnes in their home. In lieu of flowers, donations may be made to The Mennonite Church Canada, c/o CMU, 500 Shaftesbury, or to the charity of your choice. A celebration of Agnes' life will be held at 10:30 a.m. on Friday, February 14, 2014 at Bethel Mennonite Church, 465 Stafford Street, Winnipeg.