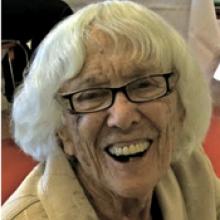 LEONA RUTH BILLINKOFF (nee WAGNER) Born March 10, 1920, passed away peacefully on January 30, 2014 at Riverview Health Centre in Winnipeg. She is survived by son Martin (Darcy), daughter Batya (Jeff), and granddaughters Danielle, Courtney and Chelsea, and was predeceased by her parents Aaron and Rose Wagner, brothers Irvin and Mitchell Wagner, husband Alexander (Alex) Billinkoff, and daughter Arlene D. Billinkoff. Leona graduated from St. John's High School in 1935, and received a B.A from the University of Manitoba in 1939. She married Alex in 1940, had three children, and lived in the same home in West Kildonan from 1950 to 2011. A lifelong student, she returned to the U of M in 1961 to obtain her teaching certificate, thereafter teaching French and English at Joseph Wolinsky Collegiate. She also studied basic design at the U of M School of Fine Arts. Leona was a leading force in the Winnipeg Jewish community for many decades. As the President of the Talmud Torah PTA (1951-1954), she headed fundraising efforts at the behest of Rabbi Abraham Kravetz z/l to expand the Hebrew Day School into a full-fledged elementary and high school. She was President of the Jewish Welfare Fund Women's Division (1956-59), and was also involved in musical productions in the Hebrew Theatre. This flair for theatre served her well in her roles as "eemah" (camp mother) and administrator at Camp Massad (1953-1978), the first and only Hebrew-speaking summer camp in Western Canada, founded on Labour Zionist principles and fostering Jewish culture through music, dance and skits. As "eemah" she supervised the kitchen, comforted homesick children, and developed programming. With the help and expertise of her husband Alex, she oversaw the growth of a ramshackle campsite in Sandy Hook, Manitoba to a self-sustaining entity with quality programming that is still thriving 60 years later. Fervent Zionists, she and Alex traveled to Israel numerous times starting in the 1950's. In the 1970's, Leona began experimenting with needlepoint and fibre art, using twine, glass and other non-traditional materials to fashion wall hangings, rugs and religious-themed artifacts. She enjoyed a great deal of success, with solo exhibits at the Leonard Marcoe Gallery and Jewish Heritage Exhibit, and group exhibits at the Jewish Women's Art Show, The Eclectic 80's at the Winnipeg Art Gallery, and Women '84 at the International Inn. Her works are part of diverse corporate collections including Xerox of Canada, Mount Carmel Clinic, the Province of Manitoba (Government House) and the Manitoba Conservatory of Music. Her innovative hangings grace the walls and windows of private homes in Canada, USA, Israel and Europe. Leona was known as a fiery advocate, generous supporter of the arts and numerous organizations both Jewish and secular, devoted friend, and party-giver par excellence. Her dinners and celebrations included family, artists, dancers, nuns, and even a clown. She encouraged, challenged and inspired many people, and will be greatly missed. The family is grateful to Dr. Mark Boroditsky, Seven Oaks Hospital, and the entire staff of Riverview Health Centre B-2. Special thanks to her beloved caregivers, Norma, Joy and Polina.