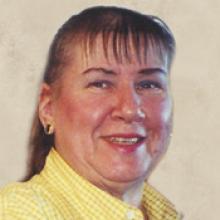 MARIE MARGARET MAYNE (ELLILA) Passed away peacefully with her family by her side at the Assiniboine Centre, Brandon, MB, on Saturday, February 8, 2014, at the age of 66 years. Marie was born on July 3, 1947, to Ivan and Margaret Ellila in Churchill, MB. She married Allen Robert "Bob" Mayne on October 20, 1966. Their first child, Robert Edward, was born on April 26, 1967, followed by their daughter, Vicki Ann, on January 5, 1970. The family moved to Yellowknife in 1972 and later moved to Peace River in 1978 to partner in their vacuum business. They transferred to Winnipeg in 1984, moving to Brandon in 2003 after purchasing the franchise. Marie was the main force in this location and she will be missed by all. Marie will be lovingly remembered by her husband Bob; son Robert (Linda) and their children Catherine and Joshua of Winnipeg; daughter Vicki (Mark) Klym and their daughter Savannah of St. Francois Xavier. Marie is also survived by her brother Edwin (Cheryl) Ellila and their daughters Camille, Janelle, Heather, Bonnie and their families; sister Christine and her son Will Scutt and family of Kenora; brother-in-law William "Bill" (Dorothea) Mayne of Palm Coast, Florida, USA; brother-in-law Ted (Joan) Mayne and their children Amber and Lindsay of Winnipeg, sister-in-law Trudy (Bud) Quint and their children Elizabeth and Alexandra of Winnipeg. A memorial service to celebrate Marie's life was held at the McDiarmid Drive Alliance Church, Brandon, MB, on Thursday, February 13, 2014, at 11:00 a.m. with Pastor Dan Pope officiating. Donations in memory of Marie may be made to CancerCare Manitoba, 675 McDermot Ave., Room ON 1160, Winnipeg, MB, R3E 0V9. Messages of condolence may be placed at www.brockiedonovan.com. Arrangements are in care of Brockie Donovan Funeral & Cremation Services, Brandon, MB, (204) 727-0694.